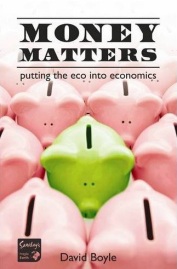 “We are all implicated, with our mortgages and pensions, in a bizarre system that operates ostensibly in our name” says David Boyle. “It is complicated, more than a little insane, and it functions in a dream world above people’s ordinary lives – both useless and irrelevant to them and corrosive of them at the same time.”

Money Matters sets out to explore how the money system works – what is money? How is it made? Who controls it? Why is there never enough to go around? It does so in simple terms, and is very readable. Each chapter is only a couple of pages, so you don’t get bogged down in detail. There are little introductions to famous names such as Adam Smith or John Maynard Keynes. Lots of bullet points, and at the end of every chapter there’s a book or website to look up if you want more information. It’s the most accessible book on economics I’ve come across, by a considerably distance.

Boyle wears his agenda on his sleeve. He is after all a fellow at the new economics foundation, an organisation that has 101 ideas for re-imagining our relationship with money. Chapter after chapter here exposes the brokenness and inequity of the current system, from tax havens to the monopoly of the ‘big four’ accountancy firms, subsidies, or the fact that the “greedy 24 year olds” of the City make more money out of instability. Justice is a big theme, as the whole system works in favour of those who are already rich: “flexible, subsidised, endlessly available and forgiving to the wealthy, while it is concrete, scarce and unforgiving to everyone else.”

Fortunately, there are solutions that will be better for the planet and for society, and this is where David Boyle really hits stride. Local money, community banking partnerships, swapping, time banking, co-ops, there are dozens of examples of good, practical, real-life alternatives. Best of all, Boyle even has a closing section on the spirituality of money, exploring ethical consumption, greed, and voluntary simplicity. He even moots the idea that the best thing to do with money is give it all away, and without that kind of internal change of perspective, all those good ideas will never be tried.

If money confuses you, or if you know somehow that it isn’t working but couldn’t say why, this is the book for you. If you want more detail, hang in there for the brand new The New Economics, A Bigger Picture, by David Boyle and Andrew Simms. If you’ve only got room for one book on money in your life, this is as good an introduction as you’re going to find.