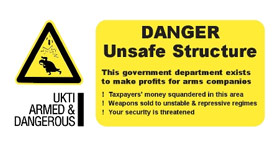 Britain’s arms sales to the Middle East are up 27% on last year, according to an investigation by The Times this week. The increased security risk of the ‘Arab spring’, and perhaps David Cameron’s arms sales tour earlier this year, are paying dividends to our various arms companies.

Despite government promises to clamp down on sales to oppressive regimes, 48 defence licenses are still open to Bahrain. Saudi Arabia has placed orders worth over £20 million, despite assisting Bahrain in quashing the popular uprising there. Perhaps worst of all, we were still selling arms to Gaddafi’s Libyan regime in February – our own forces then flew air strikes against that same regime in March. Are we stupid?

Apparently so. If Gaddafi was a UK citizen, he would never get a gun license. But he’s not, so he can have as many weapons as he wants. Amnesty International have shown evidence of British made armoured cars used in breaking up demonstrations in Libya. We may have declared our allegiance to the transitional government, but Gaddafi’s loyal troops are still shooting at our new friends with our ammunition.

To make matters worse, it isn’t just British businesses scoring defence contracts in a global marketplace. Britain’s arms trade is actively subsidised. Your tax money and mine is being spent, right now, to promote our arms companies. According to Stockholm International Peace Research, the sector enjoyed subsidies to the tune of £700 million last year. This includes export credits, research grants, and military attaches at UK embassies, who are expected to promote Britain’s arms companies, but the big one is UKTI‘s Defence and Security Organisation.

This is a government department dedicated to promoting our arms trade. It is a branch of UK Trade and Investment, which answers to the Foreign Office and the Department for Business. The DSO’s brochure says its mission is “to help the UK’s defence and security to achieve export success”. In a briefing entitled ‘doing business in Libya’, since withdrawn, the UKTI explains that “there are real opportunities for both large and small UK companies in Libya”, and defence and security is one of the “priority sectors” identified.

Do you think it’s acceptable that there is a government department dedicated to promoting  the arms trade? I don’t. I resent my tax payments being used to arm tyrants and make the world a more hostile place. If you want to do something about it, you can start by signing this petition to tell the government that it is not okay.