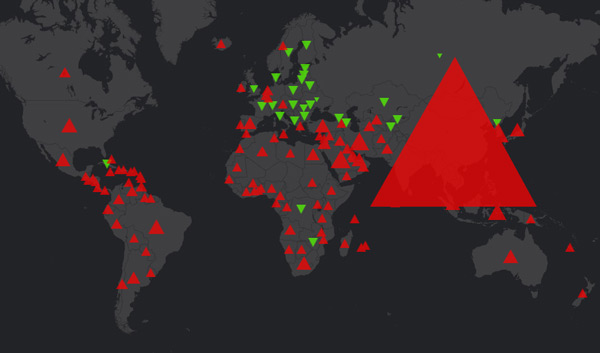 The mapping and information company ESRI have just released this rather striking image. It shows the change in carbon emissions by country since 1990. Green triangles show the countries that saw fall in emissions over that quarter century, thus meeting their Kyoto agreement targets. Red triangles show a rise.

Yes, that’s China. Hard to miss it. In fact, it’s impossible to see the rest of Asia’s emissions, buried as they are under that whopping red triangle. (If you want to see India’s emissions and China’s neighbours, visit the interactive map and zoom in)

Of course, we’re talking growth in emissions here, not total CO2 emitted – such a map would be less generous to the developed world. China started from a low base here. 60% of its population were living in serious poverty in 1990, a percentage that was driven into single figures in a remarkably short 20 years. It was always going to be a massive red triangle, and it’s what China does next that really matters.

It’s also worth putting globalisation in the picture. One of the main ways that European countries have been able to lower their emissions is by outsourcing heavy industry to China. A good chunk of China’s emissions growth is actually ours, if you were to follow the exports to their destination.

Elsewhere on the map, my curiosity drew me to the outliers, such as the green triangles in a handful of developing countries. Is there anything we can learn here? Unfortunately, the two examples in Africa are the DRC and Zimbabwe. There are reasons why CO2 emissions fell in those countries, and there’s nothing to celebrate about it – nothing reduces emissions like long-term political and economic instability. Emissions fell in Cuba and North Korea too, you may notice.

The other thing I noticed is how emissions have fallen in so many Eastern European and Central Asian countries. I suspect that this reflects the post-Soviet Union economic doldrums, followed by a shift towards Russian gas. I’d be interested to know if any other factors are in play.

One thing I do know – by the end of the next quarter century, every triangle on that map needs to be green.