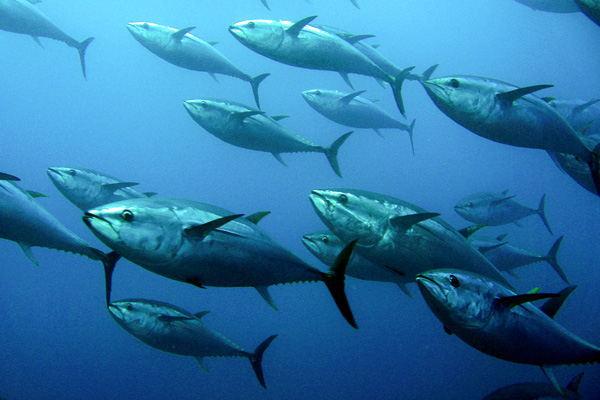 John West is Britain’s leading tuna brand, with a third of sales across the country. Unfortunately they’re also the worst performing tuna brand when it comes to sustainability. 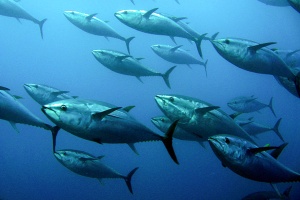 Our relationship with the tuna is complicated. First of all, it’s a predator. We don’t tend to eat their land-based equivalents, and would be horrified to find them on a restaurant menu. Somehow our self-written ethical rules are different with sea creatures, and the tuna is fair game. (Next time you’re at the sandwich counter and contemplating tuna, ask yourself how much you’d want the sandwich if it were cheetah and mayo.) If we follow the general rule that meats from lower on the food chain are the most sustainable, then arguably we shouldn’t be eating it at all.

But we do, and there’s a massive market for it. The global tuna catch runs to over 4 million tons a year, and that’s not a level that can be sustained. The annual haul of some species, such as Bigeye and Yellowfin, has already peaked and begun to decline. Bluefin is now critically endangered. Catch overall looks like it is beginning to plateau, and there’s no question that our take is too high. Since the larger tuna can’t really be farmed, we’re going to have to think again about our tuna consumption if we want to keep eating it in decades to come.

The second issue around tuna is the way it is caught, and this has been the focus of consumer campaigns. There are several ways to catch them, including purse seine nets, longlines and pole lines. The first two of those also catch dolphins, sharks and turtles. These are just thrown overboard, making it a very ecologically damaging way to fish. Catching tuna with a pole and line is the only way to avoid this bycatch, but it’s slower and more expensive.

With growing awareness of these problems, sales of dolphin friendly tuna have been rising. (Though that also begs the question of why it’s wrong to eat dolphin.) Campaigners like Hugh Fearnley Whittingstall have got shoppers thinking about it, movies such as The End of the Line have presented the issue well, and league tables of sustainability have given us the information to choose wisely. Pressure on the big brands is mounting and several have made new commitments to phase out the most harmful practices, including Waitrose, Sainsbury’s and M&S own brands.

Among those making big promises is John West, who pledged to deliver 100% sustainable tuna by 2016. Something’s clearly gone wrong, since the latest league table found they had only managed 2% in the five years since they announced their big plans. That’s clearly not good enough, and in the last couple of weeks we’ve seen some welcome activism from a new source: the supermarkets themselves.

Tesco were the first to move, saying that they would remove John West from their shelves if they didn’t improve their record. Waitrose have now done the same, applying the same standards that they use on their own brands. Greenpeace are now petitioning Sainsbury’s to give John West the same ultimatum. This is good to see, and may prove a tipping point on the issue.

That would be a big win for marine biodiversity. It wouldn’t be a victory for the tuna though, which remain overfished – and I wonder if John West is actually being asked to do the impossible anyway. Ultimately we have to reduce our consumption of tuna, regardless of how it is caught. It doesn’t need to be off the menu entirely. Greenpeace estimate that a global catch at half the current level would allow stocks to replenish, so that’s a matter of eating half as much. That implies demoting it from the kitchen staple that it is today, and making it something a bit more special. If we can’t bring ourselves to do that, then it will be forced off the menu in the long term and the choice will be out of our hands.

In short, yes, there is such a thing as sustainable tuna – but the pole-caught ‘ethical’ tins only solve half the problem, as Ethical Consumer magazine recognises by not listing any brands in its recommended buys. Sustainable tuna needs a sustainable industry, and while recent progress is to be celebrated, we’re a long way from that just yet.