Over the past couple of years it’s been encouraging to see the economics of energy generation turn in favour of renewable energy. The long expected grid parity has been reached in many places, and it’s genuinely cheaper to build renewable capacity rather than burn fossil fuels. In Britain we’ve seen coal use pushed back as renewables expand, especially solar power. The government’s proposed phase-out of coal by 2025 looks entirely possible. 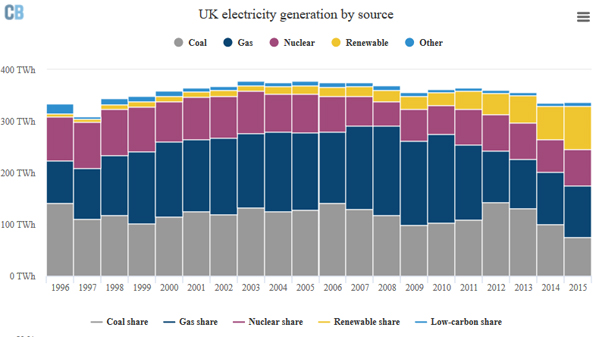 In his book The Switch, which describes this whole process, Chris Goodall explains how investment in renewable energy naturally makes more sense once you pass a certain point:

“Electricity from PV is free to produce and so even if the market price of power falls close to zero, solar power will still be shipped out into the grid. Once installed, PV (and wind-generated) electricity will always be able to undercut all other sources of power.”

On a national grid, electricity is bought on demand, with producers pitching their price for the next hour. The costs of renewable energy are almost all up-front. Once installed, there’s no fuel to pay for and so it will always be cheaper to draw on renewable energy than on gas or coal. Renewable producers will always be able to offer a lower price than coal or gas, and become the default supplier whenever there’s a choice. The more renewable energy we have on the grid, the more time gas and coal power plants will spend offline.

“If solar or wind are producing enough electricity, coal and gas power stations will be idle, not even earning the money needed to pay staff or maintenance costs, let alone the interest on the money borrowed to construct the plant.”

If you already have a conventional power plant operating, it still makes sense to keep it going, not least because solar power in Britain is highly seasonal and you know you can make money in the winter. But if you’re an investor and you’re deciding whether to fund renewable energy or new fossil fuels, the latter is an increasingly tough sell.

The useful thing about this is that it’s a market dynamic. It doesn’t rely on the government doing the right thing. Renewable energy just makes more sense economically, regardless of the official support for a new age of fracked gas. Naturally it would be better if the government did get it right, as it should be wind power picking up in the winter rather than fossil fuels, but the tables have turned. Renewable energy has the upper hand.