The Resolution Foundation’s latest report looks at wellbeing and life satisfaction, and I rather liked this graph. It plots a range of different occupations by life satisfaction on the Y axis, and average income on the X axis. 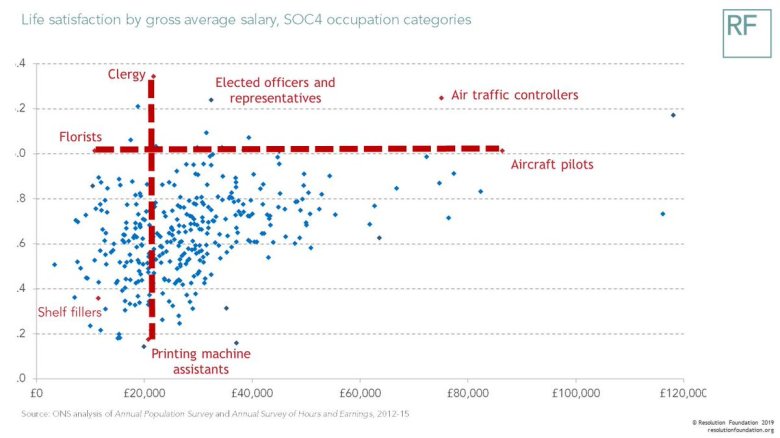 As you’d expect, average earning jobs form a cluster with some of them more satisfying than others. The range in satisfaction for low paid jobs is quite striking. One might assume that bad jobs would also be badly paid, or perhaps vice versa, and there certainly are plenty of occupations that are underpaid and unsatisfying. There are also plenty that are rewarding despite being badly paid. The report highlights florists: average income of £10,800, but on a par with pilots at £86,300 for satisfaction. Makes me wonder which of those unmarked blue dots is the freelance journalists.

There’s a wide spread of blue dots between £40,000 and £60,000 too, suggesting that high earnings is no guarantee of life satisfaction. Then there are the real outliers – clergy being the most prominent. They have higher life satisfaction than any other profession on the chart, for a salary of just over £20,000. As the report says, “the well-being someone derives from their job is likely to relate to more than just what they get paid.”

This is something that Katherine and I write about in The Economics of Arrival. Good work doesn’t necessarily mean giving everyone higher salaries, paid for out of endless economic growth. There are all kinds of ways to give employees more flexibility, more of a voice in decision making, a share in profits or even employee ownership – all of which would raise life satisfaction.

To put it another way, in an economy moving beyond growth, the challenge is to nudge those blue dots upwards rather than along.