On Tuesday the UK government’s chief scientific advisor declared that genetically modified crops were crucial in feeding the world in the future. Sir David King, speaking to the Royal Society, said “By 2050 we will need to feed over 9 billion people on the planet. We will, I believe, only do this with the assistance of a third green revolution, and GM technologies will be crucial in the delivery of this.” Genetically modified crops are not currently grown commercially in the UK, or most of Europe, and Sir David King called on the government to reconsider its position on the matter. In this he echoes George W Bush, who has similarly rebuked European governments. “For the sake of a continent threatened by famine,” he told a biotech conference in 2003, “I urge the European governments to end their opposition to biotechnology. We should encourage the spread of safe, effective biotechnology to win the fight against global hunger.”

But do we really need biotechnology to feed the world? It helps to look at who is calling for it. Read up on the issue, and you find the people shouting loudest for the liberalisation of genetic engineering are those most likely to profit from it – namely, the big agricultural corporations and those funded by them. Monsanto, the world’s leading GM company, is a generous donor, and has been rewarded with a string of appointments across US government agencies. Among the more obvious conflicts of interest are a former Monsanto executive appointed as Deputy Administrator of the Environmental Protection Agency (Linda Fisher), and Ann Veneman, the former Secretary of Agriculture now with UNICEF, who was previously a board member at one of Monsanto’s subsidiaries.

With these kinds of friends, and plenty of lobbying money and PR campaigns, the GM companies are able to present a good case. And at first glance, GM foods make sense: crops that need less water for planting in drought areas, plants more resistant to blights, potato leaves that are poisonous to the beetles that destroy normal potato harvests, foods loaded with extra nutrients for areas where people are under-nourished. At face value, these sound great, and the PR companies get good mileage out of innovations such as ‘Golden Rice‘ – a rice that contains beta-carotene, adding vitamin A. Insufficient Vitamin A can cause blindness, a serious problem in poorer parts of Africa. 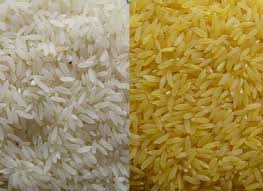 However, while Golden Rice may sound like a great idea, only a tiny percentage of the research going into biotechnology is aimed at such worthy causes. According to Peter Singer and Jim Mason’s ‘Eating‘, 99% of genetic modifications are to make crops more resistant to pests or specific herbicides. Monsanto’s ‘Roundup‘ is a classic case, a herbicide that will kill all other plants in a field, but leave the desired crop unharmed. Unfortunately, clearing the land in this way destroys the ecosystem of plants, insects and birds that existed in the field, rendering it effectively sterile, and only good for planting more GM seeds and feeding them up on branded fertilizers. This is at best pointless, at worst hugely destructive. John Robbins, author of Diet for a New America, writes: “we’re spraying our fields and food with a toxic substance to make use of a sophisticated technology that is largely unnecessary. There are simpler mechanical ways to deal with weeds, including no-till farming, mulching, and companion cropping. But of course, none of these Earth-friendly methods can be patented and sold for profit…”

Most genetic experimentation is about ensuring allegiance to the seed companies’ brand, maximising profits, and developing dependencies and monopolies. There are potentially useful developments, but they are not the priority. Even Golden Rice is not all it’s made out to be, with independent research showing you would need to eat at least 27 bowls of it a day to get your daily recommended amount of vitamin A. If Vitamin A is a problem, half a carrot has all you need, or a handful of beans. As Raj Patel points out in his book ‘Stuffed and Starved‘, “the majority of children in the Global South suffer and die not because there is insufficient food, or because beta-carotene is nationally lacking. They are malnourished and undernourished because all their parents can afford to feed them is rice.” To create a new and patented form of rice for someone who can only afford rice, is like trying to sell night vision goggles to someone who can’t afford a candle. The rice is not the problem.

This is the heart of the issue though, that biotechnology is not an urgent science, but is extremely profitable. There may yet be merit in biotechnology, and I’m not against it on principle, but it is disingenuous to claim that the world needs biotechnology to solve the food crisis. It is simply putting a noble face on the hasty and greedy roll-out of a potentially hazardous technology. To bring Africa’s hunger into the picture is particularly insulting. It is surely common knowledge by now that there is enough food in the world to feed everyone, from the huge surpluses of subsidised US corn to the EU’s butter mountains. As Amartya Sen has demonstrated, hunger is a political and economic problem as much as it is an agricultural one. People go hungry not because there is not enough food to go around, but because they cannot afford to buy it. Famine is also caused by conflict, and by displacement. Drought is also a major factor. Biotechnology as it currently stands has no answers to these underlying problems.

If we want to help the hungry, and we promised we would in the UN’s millennium goals, we need to address the real issues. Africa does not need biotechnology. It needs education, good government, and real, un-tied aid for sustainable development. Controlling the arms trade would be a better solution to famine than the introduction of GM seed. If after all those things, biotechnology can be proven useful, then I am not against it, but at the moment championing it is simply marketing in disguise.