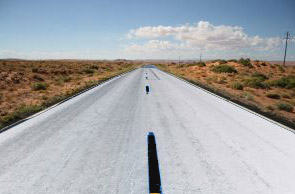 Here’s a bizarre way to combat climate change for a friday evening: according to the Climate Safety report I’ve been reading this week, “whitening the pavements and roofs of the world’s largest 100 cities would offset the equivalent of 44 billion tonnes of CO2 per year, and save money through reduced air conditioner use.”

To put that it perspective, our entire worldwide fossil fuel use is responsible for 8 billion tonnes of CO2 a year, so that’s quite a lot of offsets. I’m no fan of offsetting as a long term strategy, but that sounds like a simple and ingenious way of buying us some cool while we bring our emissions under control.

It works because dark colours absorb heat, while light colours reflect it. If we can increase the reflectivity, or albedo, of our cities, they will be cooler. More sunlight will be reflected back from the earth, rather than being absorbed into the urban ‘heat islands’ that tend to be a feature of our built-up areas. Since cities will be cooler, we can switch off the air conditioning, one of our more disastrous inventions when it comes to climate change.

We actually operate this principle with our cars already in some parts of the world – check out the ratio of white cars to non-white cars in this Kenyan traffic jam. If you’ve climbed into a black car in a tropical country, you already know all about albedo.

So, let’s get the white paint out and get started. I’m imagining roads that are white with black lines, rather than the other way round, and it all sounds a little ridiculous. But, if we learned to lay lighter coloured concrete when pouring a parking lot, or used shiny corrugated iron roofing more, or painted our shingles white, we’d make a considerable difference to the heat of our cities.