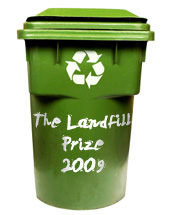 The Landfill Prize is back, taking nominations for Britain’s most useless consumer product. John Naish, author of ‘Enough’ and the brains behind the award, introduces the idea:

“You might think that the credit crunch would inspire people to spend less on consumer gear. But last month, British shoppers still racked up record-breaking days in the stores. Why? We’re addicted to consumption – a lot of which involves buying stuff that is frankly gimmick-laden, pointless junk.

We’ve got fixated on producing and consuming stuff that has no future. It’s only there to take our money on its brief trip from factory to landfill. Our instant scrap is becoming ever more sophisticated, complex – and planet-trashingly wasteful. That’s why we’re launching the 2009 Landfill Prize. The prize is to celebrate the stupendous creativity of the people tasked with inventing constantly inflated new wants for us to want. It’s a monument to perverse imagination and needless consumption. Most importantly, it’s a plea for us to say, “Thanks. We’ve got enough stuff,” and to evolve ourselves out of this crazy cycle.”

The deadline for submissions is February 10th. Once the panel has chosen a winner, the makers of the winning product will be invited to an awards ceremony. Current submissions include the electronic skipping rope, a laser-guided pair of scissors, and an electronic virtual bubble-wrap keyring.

What other overly complicated and wasteful products would you like to see celebrated?