Surprise surprise, carbon offsets are not reducing emissions. In fact, they are turning out to be “a dangerous distraction”, according to a Friends of the Earth report of the same name released this week. Instead, developed countries have simply dodged targets and continued polluting.

The idea of offsetting is to pay developing countries to make emissions cuts on behalf of developed countries, through forestry or renewable energy projects. It was agreed as a strategy at Kyoto, because it is quick, and involves a transfer of money from richer countries to poorer ones.

In reality, the logic of offsetting is deeply flawed. CO2 emissions must be cut across the board. A swap arrangement where one person makes cuts so that you don’t have to doesn’t work. Both parties need to cut their emissions. If developing countries cut their carbon emissions all the way to zero, we would still have a major problem – climate change must be addressed in the most polluting countries, not the least polluting.

Many of the projects designated as ‘offsets’ may well have happened anyway. Developing countries are, after all, developing. The report gives the example of hydro power, which China is investing in heavily. It is argued that without the funds from offsetting, hydropower plants in China would not have been built, and therefore it is a legitimate offset. But there’s no way of knowing if that’s true, and it seems very likely that alternative sourcing of funding would have been found. China is not short of investment capital, and our offset money is just a sweetener.

There are issues of justice at stake too. Poor countries should not be asked to refuse development opportunities so that rich countries can claim them as offsets. Nor should they be encouraged to refuse efficient but polluting energy sources such as coal, while richer countries get to carry on using them. As the graph below shows, offsetting allows the current inequality in emissions to continue long into the future. 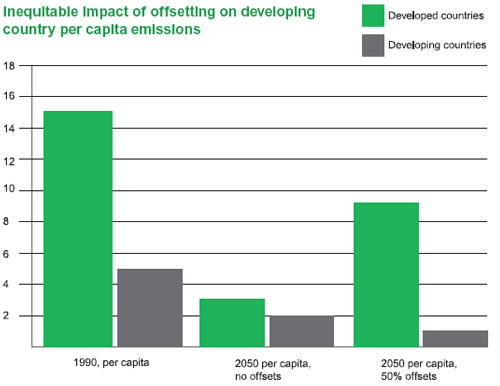 Finally, offsets are dangerous because they distract rich countries from the tougher task of cutting their own emissions. They are a lazy option, allowing countries to duck the big challenges of changing a wasteful culture.

The scale of offsetting is rarely talked about, but it has become a pervasive strategy in climate change policy. The EU has agreed to cut emissions by 20% by 220, but under their Clean Development Mechanism, over half of those ‘cuts’ could be delivered through offsets. At the moment there aren’t enough offset opportunities to go around, so the EU is actively seeking new ideas, like expanding into sectors such as nuclear power.

The UK is the biggest buyer of offsets, and a big believer in using them to meet its targets. The transport minister justified the new runway at Heathrow by promising offsets elsewhere. We may have been the first country to write carbon emission targets into law, but if we use offsets to wriggle out of them, then we have achieved nothing.