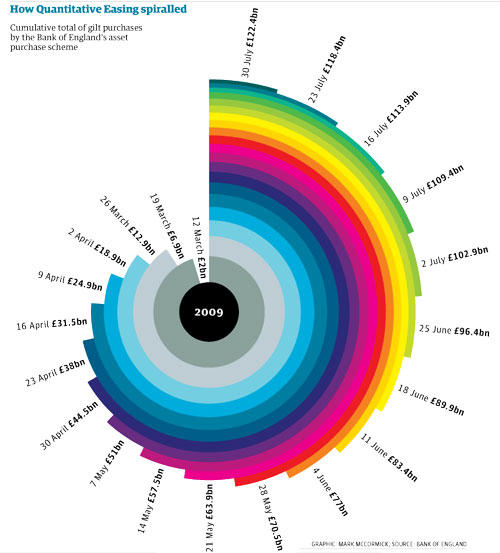 Kudos to the Guardian’s design team for making quantitative easing beautiful, but it’s still an ugly set of figures. £125 billion so far, with a further £50 billion to go. You do have to wonder what the long term effects of articificially injecting 12% of your GDP into the economy will be. Then again, what might have happened if the Bank of England hadn’t done it? Honestly, who’d be an economist?

Not being an economist, I very much hope I’ve misunderstood quantitative easing. As I currently understand it, the banking system overstretched itself and broke the economy’s cycle of debt and growth. To set that cycle back on track, the Bank of England has written itself a large mortgage, and bought assets. What assets? Corporate bonds, in the banking sector. £122 billion of the 125 spent so far has been corporate bonds, which is why investment banks have made such huge profits in the last six months.

So, to stimulate the economy, we have used IOUs from the government to buy IOUs from the banks. That’s a highly elaborate and expensive way of doing absolutely nothing useful. And yet, the economy has been stimulated, which only goes to show how futile GDP is as a measure of an economy’s health. We have spent billions of our children’s tax bills, and created nothing but profits for the very people who got us into trouble in the first place.

As I say, hopefully I’ve completely misunderstood quantitative easing. Either that or someone is laughing somewhere.