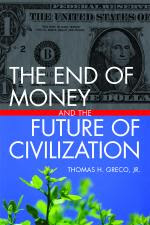 After the recent launch of the Brixton Pound and the Stroud Pound, I wanted to do a little more reading around complementary currencies, so I’ve read two books on money in the last couple of weeks: The End of Money and the Future of Civilization, by Thomas H Greco, and Money Matters: putting the eco into economics – global crisis and lcoal solutions, by David Boyle.

The End of Money might sound like a farily ominous title, but Greco’s theory is not bad news. For too long, he argues, money has been created by governments and banks. Because governments have declared that their currency is legal tender, whether or not it is worth anything, it cannot be refused. This gives them a monopoly – one they abuse. All inflation is an abuse of money, the government printing more than it is worth. A second problem is the banks, who lend at interest. Greco’s description of the ‘growth imperative’ here, how banks require more back from the economy than they put in, is insightful. It explains a lot of our obsession with growth, and I will have to write a separate post on it.

In short, “The politicization of money, banking, and finance (which prevails throughout the world today) has enabled the concentratioin of power and wealth in a few hands – a situation that has been extremely damaging to societies, cultures, economies, democratic government, and the environment.”

The solution then, is to break this monopoly by reclaiming the money system, to transcend it with better ideas. We can “circumvent the dysfunctions” of the money system with local money and local credit clearing schemes that will democratize finance. The book is full of case studies for how this could work, drawing on useful histories of the great depression era experiments, or the inter-war collapse of the German currency and the rebuilding of it through new money mechanisms. There are sections on barter, mortagages, inflation, and the separation of money and state, and Greco also has an eye on justice.

The most likely solution, and one that Greco spends considerable time on,  is online credit clearance. Credit clearance is a way of settling debts with the minimal exchange of money. (It’s what student households do when one person pays the phone bill, one pays the gas, and one pays the electric bill. Every once in a while the smartest person works out who has paid what and settles the balance, offsetting each other’s payments against each other’s debts.) In a digital economy, says Greco, there’s really no such thing as money. We all just have a rising and falling number in a computer system, so there’s no reason why we couldn’t pay for everything through credit clearance. Those who owe us (our employers) will pay the people we owe (shops, mortgage payments, etc) directly. The computer keeps score, and money is a dedundant third party transaction mechanism. All it would take is a website that does for money what the mp3 has done for the music industry, or what Skype is about to do to the phone companies.

Like most books on economics, The End of Money lost me here and there. Most of the time however, Greco’s presentation is clear, and full of useful suggestions. The book is full of fascinating little histories that I hadn’t appreciated before, like the Bank of England, or the story of how the US ran entirely on local money, with no national currency, between 1837 to 1863. It’s also rather sad to see how the early American fathers failed to notice that democracy has to be financial as well as political. The American Revolution overturned the traditions of privilege and nobility in the political arena, but it left elitism intact in business in finance. That was a costly mistake, and as the banking bailouts reminded us, even a modern democracy can act like a robber baron when it comes to banking.

The End of Money is not quite a layman’s introduction to new economics, it may be a little too technical for that. If you’re interested in economics, and why it doesn’t appear to be working any more, this is very useful. Most of all, it’s great background reading to the Brixton Pound and the money experiments we are seeing around us.