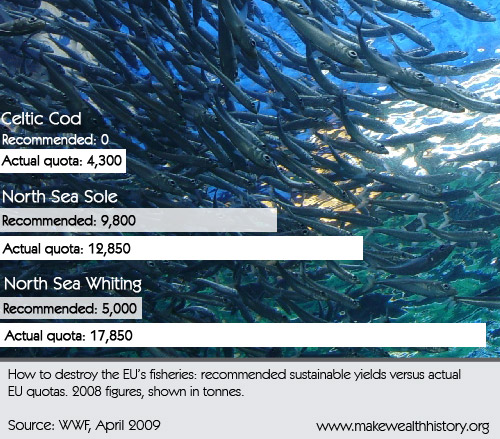 This week is European Fish Week. It’s the first one, and it matters a little more than your average ‘awareness raising’, arbitrarily designated seven days.

Europe’s fisheries have been disastrously mismanaged for decades, with the European Union presiding over the steady decline of most of its fish stocks. The region now imports 70% of its fish. The culprit is the EU’s Common Fisheries Policy, which sets quotas far too high, listening to the lobbyists and turning a blind eye to overfishing. Without reform and policing, Europe’s fish stocks will be overfished to the point of collapse.

And thus European Fish Week, a week of action across the continent. The fisheries policy is due for an overhaul in 2012, and that presents an opportunity to get it right from the ground up – sweeping away subsidies, setting scientific quotas, and then actually enforcing them. It’s an opportunity to redress the bias towards big boats and big fleets, limit technology and prioritise small local fishermen. Most importantly, it could be the last chance to institutionalise sustainability and make sure that European Fish Week is still possible in 30 years’ time.

A alliance of organisations called Ocean2012 has announced the week, and is running a series of events. MPs and experts met yesterday to discuss the problems. If you want to get involved yourself, you can sign the petition here, and if you haven’t seen it yet, why not make this the week you watch The End of the Line. (If you’re in Luton, I might even let you borrow my copy)