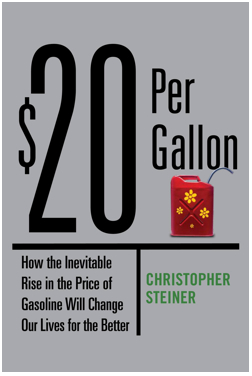 $20 a gallon made a few waves last year, for a couple of reasons. Part of it was no doubt the title – could driving ever get that expensive? – but it’s also the subtitle: How the inevitable rise in the price of gasoline will change our lives for the better. This is the first book on oil depletion that doesn’t predict catastrophe, the flipside to the doomer prophesies of James Howard Kunstler.

The structure of the book is also rather intriguing. Steiner skips the science of peak oil altogether, and gets straight to the consequences. Starting with $4 a gallon, each chapter ratchets up the price of a gallon of petrol, and explores what might happen. $4 is the easy bit – that’s what we saw in 2008. From there on up it’s all educated speculation, economic extrapolation, and some very creative thinking. In his own words, it is a “thought experiment on the what-ifs of high gas prices”.

We know how this story begins. In 2008 the oil price hit a record high. Sales of SUVs collapsed, several models were discontinued, and there was a renewed interest in efficient, hybrid and electric cars. For the first time in 30 years, America’s total mileage for the year fell. A number of small airlines folded, including the XL Travel Group in the UK, but the airlines really begin to hit the buffers at $6 a gallon, says Steiner. In 2003, fuel made up 13% of an airline’s operating costs. In 2008 it was 40%, and that’s not sustainable. To give one example, United Airlines loses $500 million with every $10 increase in the price of a barrel of fuel. Flying simply won’t continue as we now know it – there will be flights available, but not at prices we’ll want to pay regularly.

As aviation slows, so too does global business travel, replaced by tele-conferencing. Travel abroad for work or study becomes less attractive. Holiday resorts close, second homes will be sold. Cities will become more compact, the suburbs withering. Railways will see a renaissance, but supermarkets will no longer function. The construction industry will turn to local building materials. Food networks will re-localise, global trade will drop away until we are only importing essentials and luxury items. Each of these societal changes is gradual, a slow process whose impacts may take years or decades to unfold. It’s hard to say exactly when each one will be kick-started, whether it would need $10 gas or $12, but Steiner takes his guesses. Some of them will be off, no doubt, but it is a fascinating journey all the same.

While many of the predictions might be worrying, Steiner is keen to focus on the positive.  “Many people’s lives, including Americans’ lives, will be improved” he writes. “We will get more exercise, breathe fewer toxins, eat better food, and make a smaller impact on our earth.” For example, a University of Alabama study discovered that for every 10% rise in the price of petrol, there is a 2.3% drop in the number of road deaths. Another study suggests that a sustained $1 increase would mean 9 million fewer obese Americans, and $11 billion a year saved in health costs. Our cities will become more liveable, communities rebuilt and families less fragmented. We’ll learn to value our possessions again. Commutes will shorten, and as Jeff Rubin has suggested, offshoring will go into reverse and industry jobs will return.

This is all great, if Steiner is right. However, by writing a deliberately positive book, he is in danger of overstating or glossing over some of the downsides. He neglects to mention that every spike in the oil price has caused a recession. If it’s a prolonged recession, there won’t be any money for the high speed rail or renewable energy masterplans that the book predicts in later chapters. He talks about the end of suburbia without pausing to reflect on the fact that it could leave millions of American families utterly bankrupt.

In case you hadn’t spotted it in the title, it’s also a US-centric book. That’s not Steiner’s fault, but it’s worth mentioning for non-US readers. I’d love to see a European edition or an British equivalent. There are, for example, long and specific sections on the solvency of US airlines, and no mention at all of Europe’s short-haul addiction. And I’ve still yet to see an international perspective on peak oil – life may or may not be better for us in the West, but how will it affect parts of the world with less capital to adapt? Again, not a criticism, but a gap in peak oil writing which remains unfilled.

In short, $2o a gallon is a great new perspective on oil depletion. You’ll want to read it alongside something more pessimistic, and draw your own conclusions. Transitioners will find it very valuable, especially in drawing up something of a timeline of cultural change. Steiner dives pretty deep, with all kinds of unusual ideas popping up – what will for post offices, school buses? Will we still eat sushi in the future? – making this an intriguing and thought provoking read.