The UN released its latest Human Development Report (pdf) last week. It’s the 20th year they’ve produced the report, and it shows nothing but progress on the Human Development Index, the report’s metric of wellbeing composed of income, life expectancy and literacy rates. This is something they quite rightly celebrate, before exploring the changes in a variety of ways. There are new tools to break the HDI down to show inequality, and some interesting conclusions on economic growth.

If you compare changes in the HDI and in GDP per capita, you get a strong correlation – but then a third of the HDI is income, so that’s not surprising. The graph below right shows schooling and health without the HDI’s income component. Comparing this with GDP per capita over time, “the correlation is remarkably weak and statistically insignificant”, to use the report’s own words. 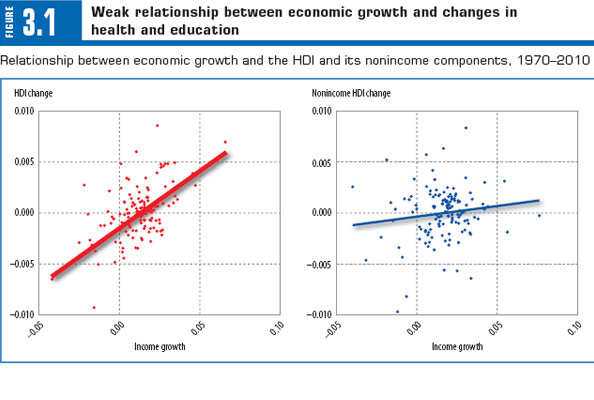 There are a variety of reasons for this. One is that there is a lag as rises in income translate into improvements in healthcare and education. And once countries are developed, there are fewer gains to be had in wellbeing. As technologies and new medicines filter down, it’s cheaper for poorer countries to adopt them than it was for those who developed them, meaning income is less important.

Nevertheless, the Human Development Index includes countries where income growth has stalled, but gains in wellbeing have still been made. “If economic growth was indispensable for progress in health and education, countries with falling GDP would not beprogressing in health and education” says the report. “But this is not the case: Iran, Togo and Venezuela experienced income declines, yet their life expectancy has risen an average of 14 years and their gross school enrolment an average of 31 percentage points since 1970.”

That doesn’t mean that income is unimportant of course – rising incomes bring all kinds of benefits, and very poor countries need to grow. But it does show that economic growth is not essential for providing good lives, even in developing countries. This really ought to have consequences for our policy making:

“Much development policy-making assumes that economic growth is indispensable to achievements in health and education. Our results suggest that this is not the case. This does not mean that countries can forget about growth—we have underlined that growth generates important possibilities. Rather, the results imply that countries do nothave to solve the difficult problem of generating growth in order to tackle many problems on the health and education fronts. This is good news.”

I’ll second that. It is good news for developing countries, and even better news for richer ones who have grown as much as they need to. Unfortunately the UN report doesn’t press this point. Having observed that growth isn’t essential even for poorer countries, it still doesn’t waver from the ‘growth is good’ mantra. Get to the section on sustainability, and all the solutions are around de-coupling growth from environmental impact, rather than asking if we actually need more growth:

“The main threat to maintaining progress in human development comes from the increasingly evident unsustainability of production and consumption patterns. Current production models rely heavily on fossil fuels. We now know that this is unsustainable—because the resources are finite and their impacts dangerous. The close link between economic growth and greenhouse gas emissions needs to be severed for human development to become truly sustainable.”