In September last year I signed up to 10:10, a campaign encouraging us all to reduce our carbon emissions by 10% in 2010. As the year comes to an end, I’ve been checking back to see if my wife and I have achieved the reduction we were aiming for.

A number of us from Transition Luton signed up, and I ran a carbon footprinting workshop so we had a benchmark to work from. My own came it at around 6 tonnes. That’s around half the UK average, but four times the one-planet living share of 1.5 tonnes that should be a long term goal for all of us.

I wrote down a few ideas for cutting our emissions. We already do the things that make the biggest difference – we’ve given up flying, I don’t drive, we’re (mostly) vegetarian, and we buy as much secondhand as we can. Working out our carbon footprints showed us what areas needed improvement however, with household energy use coming out on top.

That gave us a few starting points, and in February we replaced our aging double glazing and got a new back door. I went on a draught proofing campaign, sealing the gaps between the floorboards, and over the summer I renovated the lean-to at the back of the house so that we have a kind of airlock against the cold. We planned to install a wood-burning stove, but I’m holding fire on that one, if you’ll excuse the expression. Given the complexities of biomass, I need to find a local source of (preferably scrap) wood before I make the investment. 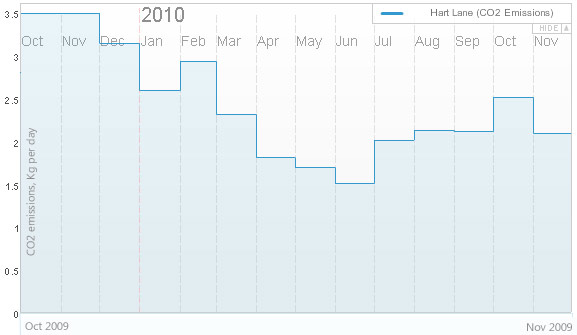 In the spring we signed up to a competition run by the council, the Green Up Luton challenge. 12 households competed to see who could reduce their emissions the furthest over the course of three months. As well as some advice and useful gadgets, that gave us the incentive to think a little more creatively. We won the challenge, and you can see the little video review of our efforts below.

During the challenge I started logging our energy use on a weekly basis on imeasure, and I went back and entered all our meter readings from bills. As of October that gives me a year’s worth of data, and I can see that our carbon emissions from gas and electricity are running about 30-40% lower than they were last winter.

So yes, we’ve delivered on 10:10, and I also know a whole lot more about our energy use. 2011 will bring its own challenges, but I have a few ideas about what to do next to build on our progress towards one planet living.