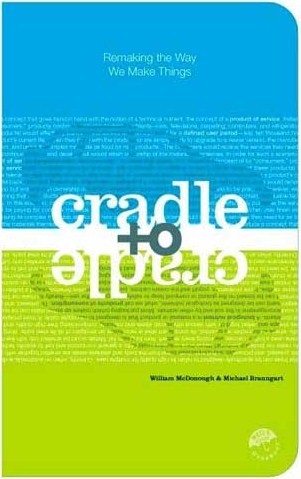 Cradle to Cradle: Re-making the way we make things is something of a classic already, an influential call for an industrial design revolution. For too long, products have been designed to be thrown away, a ‘cradle to grave’ approach. In an age of pollution, climate change and resource depletion, that doesn’t make much sense. We’d be better off designing things to be re-used.

The authors outline the problem and then explore what this would mean in practice. In nature, they argue, there is no such thing as waste. Everything is food for something else. It’s not until the advent of man-made synthetic materials that the cycle was broken. This is a matter of over-design: why should a plastic shampoo bottle last for a thousand years after the product has been used? This is inefficient and a waste of resources as well as a waste and pollution problem.

Another problem is the loss of nutrients. Resources are drawn from the earth, but cannot be returned to it after they have gone through industrial processes. A paper and plastic packet, for example, locks the nutrients of the wood pulp out of the natural cycle of decomposition. Whether it is landfilled or incinerated for electricity generation, the soil is the net loser. And just as the natural system loses the wood, the industrial system has lost the feedstocks of the plastic. Every time something is thrown away, nutrients and resources are lost, and that’s particularly short-sighted when those are non-renewable, such as metals or oil-based plastics.

In response to this pollution and resource loss, industry has embraced efficiency. In particular, it has chased after ‘eco-efficiency’, the language of ‘reduce, avoid, minimize, sustain, limit, halt’. It might be marginally better than the standard way of doing things, but it’s still damaging, perhaps even a way for industry to “redeem its reputation without significantly changing its structures or compromising its drive for profit”. Recycling is a big part of the movement, but much recycling is actually ‘down-cycling’. If green wine bottles are ground down and mixed with asphalt, that’s one use, and an inferior one. If plastic bottles are made into a fleece, which is worn and then thrown away, then the landfilling has merely been delayed. No amount of efficiency will make something inherently destructive into something sustainable.

The alternative, argue the authors, is to create positive products. “Conventional environmental approaches focus on what not to do”, they write, adding that this is “a kind of guilt management for our collective sins”. But instead of making something that’s 20% better, or 10% less harmful, what if we designed products and processes that were 100% good?

A good product would consider the economy, ecology and equity all at once, right from the early design stages. It would use nothing toxic, either to humans or biodiversity more generally. All materials would be either biodegradable, or endlessly recyclable. A pair of trainers made in this way would be worn out and then either melted down and made into another pair of trainers, or composted. As well as products, the whole process can be re-thought. The book mentions a carpet company that leases office carpet tiles instead of selling them, meaning it can bring them back once they’ve worn through and process them into new tiles.

If the ideas in the book sound a little idealistic, Cradle to Cradle is written by a chemist and an architect, giving the book a sound base of both design and process. They have decades of experience behind them, and draw on the practical examples they have worked on, clear demonstrations of the feasibility of the Crade to Cradle principles. Some of these are intriguing, varying from a new car factory for Ford to “a fabric that would be safe enough to eat”.

As an specific example, the first edition of Cradle to Cradle was printed on a brand new kind of plastic paper, invented specially for the title. Mine is unfortunately a later paper reprint, but the original was durable, waterproof, and entirely recyclable. The ink could be washed off and the ‘paper’ could be reused, or the whole book could be melted down and the plastic reused with no loss in the quality of the materials.

“Our products and processes can be most deeply effective,” Braungart and McDonough write, “when they most resemble the living world.” Though they don’t use the term, what the authors have essentially done is apply the principles of permaculture to industry. And that’s quite exciting. It’s a whole lot easier to see sustainable ways to manage land and grow food, or even design our houses. But the principles of zero waste, of working with rather than against nature, these need to work through our industrial systems too. The practical examples here prove that a sustainable future doesn’t need to be one without industry or consumer goods.