Here’s an email I received this morning:

Hello, I am ……. with ………. My company represents a leader in currency trading.

They would like to purchase ad space on your site’s page: http://makewealthhistory.org/2009/01/07/the-tobin-tax/. It would say “Forex” — with a link to our client’s site.

We can pay you $60 via PayPal as soon as an agreement is made for this ad space.

A quick $60 for a link on a two year old page – a tempting offer, and not an uncommon one. Unfortunately, casual trading in foreign exchange is a hugely destructive practice. Ask Greece. The internet has made it far too easy for armchair speculators to join stampede runs against currencies and economies. The post you want to place the ad on argues against that very practice. So no, I won’t be taking the money, thank you very much.

I’m not against advertising per se. I would happily place an ad for the Robin Hood Tax campaign, since that’s what the post is about. (In fact I already did, for free.) The main problem is that most internet advertising is computer generated around keywords. A website called Make Wealth History naturally generates ads for get-rich-quick schemes, e-books on how to become fabulously wealthy. 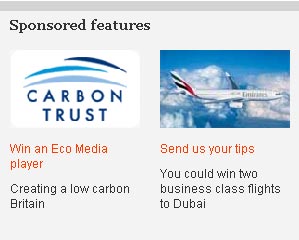 Without being able to control the adverts that the site would be displaying, I can’t commit to advertising here. That costs me a little revenue  – traffic to the blog is pretty healthy. In fact, I have to pay WordPress a small fee to keep adverts off the site. But I believe this stuff matters.

Take the example on the left, where the positive message of a low carbon Britain is undone by the prospect of flights to Dubai. I don’t want that kind of hypocrisy getting in the way of the stuff I write about.

Perhaps I’ll reconsider in future, if I can find a way of policing the kinds of adverts that get placed. But for now, mine’s an ad free blog. If you want to add the badge to your website, visit adfreeblog.org