In the papers today, another round of political rhetoric about our broken society and how it needs to be fixed. Tony Blair has weighed in on the riots, attempting to broker a third way between those who say it’s a crisis of morals and those who see a crisis of inequality. To me, and most of society I should think, it’s pretty obvious that it’s both and more besides. But doesn’t this sort of divide characterise every debate we ever have? It’s certainly true of our ongoing financial woes, forever divided between monetarist austerity and Keynesian spending, small government vs big government. Again, I reckon most people don’t think either side has all the answers.

So I wonder – am I the only one frustrated by the division of everything into left and right? And is this supposed spectrum of views holding us back?

My own views tend to be classed as ‘leftist’ by those who disagree with me. That’s not an ‘ism’ that I recognise in myself. I happen to think that left and right are defunct and irrelevant categories and we should stop using them. Here’s why:

It is irrelevant and arcane.
The terms left and right refer to which side of the king you sat on in the French national assembly*. Is that really sufficient to account for the whole gamut of global politics in the 21st century? There was a time when you could divide the world into two camps, though never neatly, during the Cold War. When that ended, the categories became irrelevant. India, China, Scandinavia, South America, the Asian tigers, and now the Arab spring have all revealed alternative political angles, new approaches, pick and mix political solutions. Global politics is far more diverse and far more interesting than left, right, or centre. Those categories are 20 years out of date.

It oversimplifies.
Left and right provide lenses through which we interpret current events and formulate policy. Those lenses occlude as many things as they include, and make ideology more important than practicality or objectivity. Opposing arguments can be herded together as one and dismissed as “those on the right”, or “those on the left”, rather than looked at for what they are. 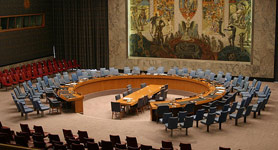 It is inherently divisive.
There’s an old joke from Wales that says that no matter how small a Welsh village, it needs two churches: the one you go to and the one you don’t go to. Politics is the same. If all political opinions have to be filed into one of two boxes, cooperation is very difficult – it requires you to ‘cross the aisle’, and that’s a risky thing to do. Some of your colleagues will see it as a betrayal, and it’s best not to compromise or break ranks. 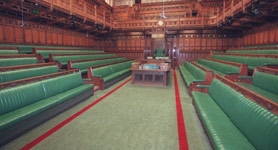 (The design of government debating chambers makes this problem very literal – compare the seating plan of the UN to that of the House of Commons, and you get the idea. The traditionalists would throw up their hands, but I genuinely believe we should make our politicians sit in a circle.)

It excludes genuine solutions and stifles creative solutions.
Policy ideas often get mangled or misunderstood by the pointless necessity to crowbar everything into one of two categories. Take Hernando de Soto for example, who advocates radical land reform (cheers from the left) by formalising property rights (cheers from the right). Since cooperation is difficult, it’s easier to find reasons to dismiss these kinds of ideas than to work together on them.

It undermines democracy.
For both the US and the UK, the political system is essentially a cartel, with two parties that have more or less agreed that taking turns is better than working together. Monoculture is a bad sign in any field, and a plurality of views is essential for healthy public debate. Countries with more direct democracy and more proportional voting systems are less tied to these old divides.

It leaves our biggest problems unfixed.
With parties taking turns at running the country according to their oversimplified analysis and ideological priorities, it’s hardly surprising that the biggest problems don’t get sorted out. There is an ‘ecosocialist’ movement, but you will search Karl Marx’s works in vain for an environmental ethic. Margaret Thatcher might have been an unlikely advocate of sustainability, but it doesn’t appear to have been an essential component of her political philosophy. Likewise, neither side has a solution for long term economic stability.

Does anybody care any more?
Finally, is it possible that this supposed spectrum is one of the reasons why interest in politics is waning? If you don’t relate to either one, there’s no place for you. Why join a political party defined by an artificial and abstract set of values that don’t mesh with the real world? This is particularly a problem for younger voters. Left and right are rooted in the past, in the Cold War, in socialism and Reaganomics. For younger voters, that era is not in living memory. Without any way to relate to it directly, it comes filtered through the paranoia and prejudice of older voters. That bi-polar era of global politics haunts us along after the event, its terms used to demonise and divide, as the branding of Obama as a socialist proves all too clearly.

Left and Right continue as terms of reference because they’re simple and convenient. They’re great for ‘othering’ those you don’t agree with, and so they persist in political discourse. To me, they’re not just irrelevant, but are actually doing more harm than good. So let’s be done with them, and let’s respect the multi-faceted plurality of modern political thought, drawing good ideas together wherever they may be found.