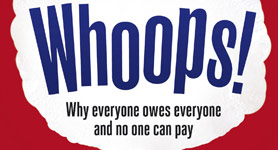 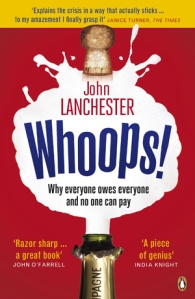 Here’s a book that’s been much recommended to me, that I’ve finally got round to. Whoops! Why everyone owes everyone and no one can pay by John Lanchester a layman’s guide to the financial crisis, and it’s not just understandable, it’s also entertaining. Quite a tall order for a book on financial collapse, I’m sure you’ll agree.

Lanchester starts further back than you might imagine, with the end of the Cold War. When the Soviet Union collapsed, it was a time of “unchallenged victory for the capitalist system.” Capitalism was vindicated. With no counter-balancing ideology, capitalist countries did not need to prove that they were better or fairer than communist countries, that they had the moral high ground, or that they delivered better lives to their citizens. With that all-important ‘other’ gone, capitalism lost its conscience, and its worst excesses came to the fore. Equality went out the window and the richest began to take an increasingly large percentage of wealth created, with the political influence to match.

Out of this climate of increased risk and decreased social justice came, in Lanchester’s words, “a problem, a mistake, a failure, and a culture.”

The problem was the sub-prime market, a sector of the US mortgage market that specialised in lending to customers with a poor credit rating. It was predatory, it was foolish, but it was highly profitable for a brief time, trading off the back of a boom in property prices. The extend of the problem wasn’t known until the property bubble burst, but by then those mortgages had been packaged up and sold on.

That’s the mistake – the way that investments were ‘securitized’ by complex mathematical formulae, making derivatives that were supposedly immune to risk. Since these were consistently given sound ratings by the ratings agencies, investors were relaxed about their debts, and allowed themselves to run extreme debt to equity ratios. With so few genuine assets on the balance sheet, it only took a small number of those investments to go bad for the whole banking system to plunge into chaos.

This misunderstanding of risk was then compounded by a failure – the failure to regulate. Toothless agencies either didn’t recognise the risk, or lacked the legislative clout to intervene. Free-market lobbyists pushed for more de-regulation and greater freedom. Central banks kept interest rates low, and didn’t spot what should have been very obvious signs of bubble activity.

Lanchester charts his way through this story, pausing to explain the basics along the way. He explores the history of derivatives, of deregulation, and the development of the sub-prime market, with wit and without jargon. As a non-economist, everything is tied back to how it impacts everyday life. By the end of the book, you won’t just understand the financial collapse, you’ll know what it means for your mortgage repayments and for our politics in the years to come.

I’ve read several books on the financial crisis now, from varying perspectives. This is the clearest, easiest to read description of the crisis by some distance. What makes Whoops special is that it isn’t an ‘I told you so’ from a marginalised economist, or a confession from a financier. It’s a book by a journalist who knows good story when he sees one. “What’s happened is extraordinarily interesting” says Lanchester. “It’s an absolutely amazing story, full of human interest and drama.”

If you just want to get your head round it in the simplest terms, with a minimum of slog, Whoops is the book for you.