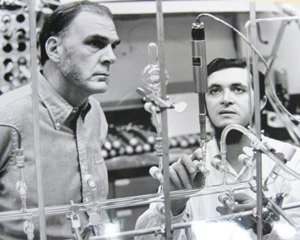 This weekend Frank Sherwood Rowland died. It’s not a name most of us would recognise, but Rowland was the chemist who first identified the possibility of ozone depletion from the use of CFCs.

Clorofluorocarbons were developed in the 1930s by industrial scientist and prolific inventor Thomas Midgeley. (He also invented leaded petrol, and therefore had “more impact on the atmosphere than any other living organism in earth history” according to environmental historian John McNeil.) ‘Freon’ was the first CFC and was invented for Frigidaire, as a non-flammable and non-toxic coolant gas for refrigeration. Other variants were soon discovered and CFCs were applied in many new contexts, including dry-cleaning and propellants for aerosol sprays.

CFCs were safer than the gases used in refrigeration at the time, but no-one had spotted the invisible damage they were doing. What we couldn’t see is that when released into the atmosphere, the gas was split apart by UV light, back into its constituent parts of chlorine, fluorine and carbon. It was Sherwood Rowland, along with his colleague Mario Molina, who identified this process, and that these free chlorine atoms could chemically alter the earth’s protective ozone layer.

Rowland and Molina published their conclusions in the Nature journal in 1974. It was not immediately recognised, and the chemical industry were quick to dismiss their findings. The Alliance for Responsible CFC Policy was formed to lobby government against regulation and block any restriction on their use. However, in 1985, the British Antarctic Survey claimed they had spotted a ‘hole’ in the ozone layer, confirming Rowland’s prediction. NASA verified it, and it was obvious that the situation was urgent – a rise in skin cancers and cataracts could also been identified in the countries most directly impacted by lower ozone levels. 20 countries committed to pursuing a ban on CFCs at the Vienna Convention.

Industry opposed this idea, but stepped up development of alternatives to CFCs at the same time. Dupont, the world’s largest user of CFCs and a vocal critic of ozone science, finally dropped their opposition to a ban. In 1988, the Montreal Protocol agreed a global ban on CFCs. In stark contrast to more recent environmental agreements such as Kyoto, the US Senate were big advocates of controlling CFCs and the US were the second country to ratify.

Mark Lynas describes the Montreal Protocol as the finest hour of the environmental movement. It was a disaster averted by science, political action and international cooperation. The story has its heroes in men like Rowland, who received the Nobel prize in 1995. It also has its villains, the industry lobbyists who sowed confusion and skepticism for the best part of a decade to protect their own interests. It’s a story that shows what is possible, and that offers a glimpse of what climate negotiations could be if we were more prepared to work together. And it shows the importance of scientists who aren’t afraid to blow the whistle, and stick by the science in the face of persecution. Without men like Sherwood Rowland, the world would be a very different and less liveable place.