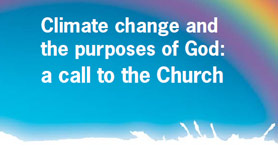 I neglected to mention it at the time, but this Lent saw the launch of the Ash Wednesday Declaration – a call to UK churches to take climate change seriously and incorporate it into their theology. We’ll have to wait and see what difference this particular one makes, but these sorts of declarations or confessions often turn out to be important in church history.

The Christian faith is not a static belief system. It is evolving and dynamic. Each generation has the responsibility of applying the vision of the ‘Kingdom of God’ to the moral challenges of its own time. The New Testament writers looked at how Christians should live well in the context of the Roman Empire. More recent generations have addressed slavery, workers’ rights and child labour. Sometimes the church has led these debates in the public sphere, and sometimes we’ve got it badly wrong.

Specific social issues sometimes take a while to filter through into the church’s consciousness, and a declaration can be a way of stating a position. The Barmen Declaration drew a line in the sand for churches in Nazi Germany. Several denominations took a position against Apartheid this way. Among our own challenges are inequality, AIDS, biodiversity loss, and climate change.

The Ash Wednesday Declaration is a way for churches to formally agree that climate change is a matter of justice, of stewardship, and is not an optional extra for people of faith. “Care for God’s creation – and concern about climate change – is foundational to the Christian gospel and central to the church’s mission” say Operation Noah, who have issued the challenge.

What caught my eye however, is a particular paragraph in the declaration:

“God is just and requires justice in response from us. This justice applies to poor communities already suffering the devastating consequences of climate change, to future generations, and to all other creatures. The prophets put economic behaviour at the forefront of their call to justice. The primary driver of human induced climate change is the belief that prosperity depends on limitless consumption of the earth’s resources. Today, the challenge is to seek a different, sustainable economy, based on the values of human flourishing and the well-being of all creation, not on the assumption of unlimited economic growth, on overconsumption, exploitative interest and debt.”

There you have it – the postgrowth economy is a matter of theology, as well as common sense, logic, and basic survival. I happen to believe that, and find it frustrating that most Christians haven’t connected their faith to economics or the environment, so it’s great to see that the declaration has been backed by the leaders of the Church of England, the Methodist, URC and Baptist denominations, as well as Christian charities such as Tearfund and Arocha, and the Spring Harvest festival.

Now let’s hope it filters down from the figureheads of the church to the ordinary folks out and about in the real world. Because that’s a whole lot of people to add to the unstoppable wave that is the postgrowth movement.

I’m not entirely alone here, I should add. There are plenty of others who understand the theology of economic growth, including readers here. It turned up at the Christian Ecology Link conference recently. Sam Norton read the declaration and drew up a more specifically postgrowth statement here, and he has already written about the theology of peak oil and the limits to growth in his book Let us be Human, which I must read. So postgrowth economics is making in-roads into the church, slowly.

But in the interests of speeding it up a little, I’d like to explore the theology of postgrowth economics in a bit more detail.  But not being a theologian myself, I’ll need a little help – anyone want to join me? If you’d like to collaborate, get in touch!