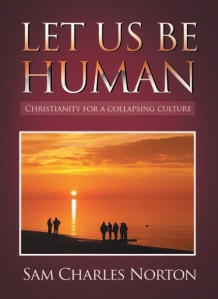 Sam Norton is a Church of England rector committed to teaching Christians about the big issues of our time. I came across his work through an essay on the theology of peak oil a few years ago, and wrote it up here on the blog. That essay has now become a book: Let us be Human, a call for ‘Christianity for a collapsing culture.’

The basic premise of the book is that the church needs to understand the converging crises of the 21st century and live out a distinctive response. The challenge to every generation of Christians is different. Ours is to shepherd our communities through the end of the oil era, and the inevitable collapse of the perpetual growth paradigm.

Norton begins by explaining peak oil, and then sets it as one facet of the larger problem of the growth imperative. “The predicament we face is that our way of life has been built up around the maintenance of exponential growth – and as that growth crashes into ecological limits, so too will that way of life.”

The middle section of the book looks at the root causes of this predicament. For Norton it is a crisis brought on by a lack of wisdom, and with a background in philosophy he is well placed to explore this idea. An over-emphasis on scientific rationalism has blinded us to other ways of thinking. We are capable of remarkable scientific and technological breakthroughs, but don’t know how to use them wisely. “Our sense of what is right, our sense of what is of value, our sense of what is human and what is humanly important – these things have all been ravaged by the dominant culture.”

Consequently, technology and science have become idols, in the Biblical sense of something that offers only false promises of life. Understood that way, societies that pursue consumerism and economic growth at the pursuit of all else are not just wasting their time, but undermining their own prosperity to satisfy the demands of their false gods. We may not literally sacrifice our children like the ancient worshippers of Moloch, but it’s our children who face the consequences of our decisions.  “The Western way of life, with its excess consumerism and mindless destruction of creation – this way of life destroys life” says Norton. “The vision of Christian life, of full humanity, is that there is a way of life shown to us by Christ which allows us to be all that God intends us to be.”

That vision includes greater equality, and a society that doesn’t leave people behind. It includes simple living and generosity. In means wisdom and forward planning. It also means saying no to the old order of things. “It is our Christian duty to turn aside from shoring up the existing Imperium and concentrate on constructing local communities which can sustain civility and the intellectual and moral life through the collapse of our culture.” As it happens, Christians have done that plenty of times before.

The book doesn’t explore this conclusion in any great detail, which is a bit of a shame. Transition Towns get a mention, but without elaborating. Norton writes that others have covered that ground and leaves it there, but those others haven’t spoken directly to the church, and a few starting points might be helpful. But this is a book about why, not how. Perhaps the practical advice is a separate project or another writer.

My only other complaint is that climate change only gets a passing mention. That’s because Norton is flagging up growth as the bigger issue, and climate change is technically a secondary concern. It can tend to crowd out other issues, so I can see why Norton downplays it, but knowing how easily many Christians overlook environmental issues, it would be a shame to give the impression that the climate doesn’t matter much. Perhaps it could have been mentioned alongside deforestation, biodiversity loss and debt as the wider symptoms of exponential growth.

If you move in mainstream Christian circles at all, you’ll know that Norton is swimming against the current here. In my experience at least, the church is no more aware of the growth dilemma than the general culture is. That’s a shame, because churches should be natural hubs for imagining an alternative lifestyle together – that’s pretty much what they’re for. Churches don’t build community, they are community. There’s a vital opportunity there if we can learn to see it, and Let us be Human deserves a bigger audience.