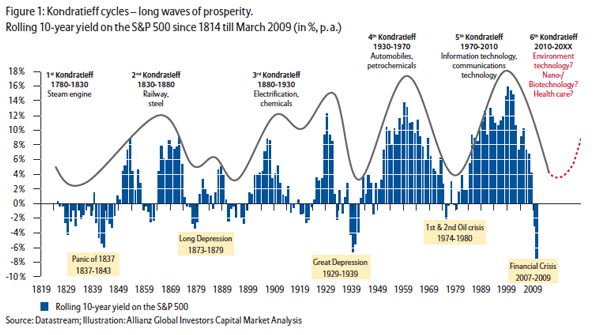 There is a theory in business that the economy moves in long cycles, driven by technological innovation. It’s an idea made famous by Russian economist Nicolai Kondratieff (or Kondratiev) who identified a series of technological booms. The first came with the invention of the steam engine and the revolution in the textiles industry. The second was the building of the railways. He identified a third in chemicals and and electrical engineering at the time of his own writing, around 1925.

Since then economists have suggested two more, the rise of the car, and then the invention of the internet and digital technologies. According to the theory, each of these breakthroughs spurs a long boom of rising prosperity, then a turning point and a crisis.

Kondratieff’s contribution to economics has been largely forgotten, partly because he fell between political ideologies. He was writing in Communist Russia and advising the government, so he is easily dismissed by capitalist economists. But he wasn’t exactly popular in his home country either. He spent the best part of a decade in jail under a dubious sedition charge and was executed in 1938. His works weren’t translated into English until the late 90s and he still doesn’t get a whole lot of attention. It’s also a rather more complicated theory than it first appears, conflating credit, innovation and demographics.

Still, some economists are revisiting the idea of Kondratieff waves at the moment. A new paper from the investment house Allianz suggests that we may be on the cusp of  “the sixth Kondratieff”. Out of the current crisis could come a rising wave of new technology around renewable energy, biotech, nanotech and health.

In this view, the current wave has come to a close. There are few new efficiencies to be gained from internet communications, the pace of innovation is slowing. The IT boom was all about labour efficiencies, Allianz suggest, and this new wave will be based on efficiencies in resources and energy.

That puts Allianz on the optimistic side of renewable energy and various other ‘eco-trends’, those who see them as an engine for growth and prosperity. Plenty of others dismiss them as expensive, futile, or holding back the economy.

I have no doubt that there is a wave of innovation going on around alternative energy, and in the fields of biotech and nanotechnology too. You only have to look at the number of patents registered over the past few years, or the market price of solar power to see the reality of the alternative energy boom. Whether that constitutes a ‘sixth Kondratieff’, I’m not so sure.

Huge fortunes will be made in all of those sectors, but I don’t think they can drive prosperity across the whole economy. It would take some monumental breakthroughs to completely offset our fossil fuel dependency, and there are plenty of other factors that will be a drag on the economy, from the damage from climate change to the stresses of a growing and aging population. The technologies of the 21st century are emerging as the last century’s technologies begin to fail us, which wasn’t the case in the last waves.

“Will the environment, biotechnology and health sectors serve as the economic engines of the future and put us back on a path of sustainable growth?” the paper asks. That’s a question in two parts, with two different answers. Yes, those things are likely to be economic engines of the future, and a smart investor would be looking into them. But no, they won’t put us onto a path of sustainable growth, because that’s still an oxymoron.