With pressure on global food supplies, and with money to be made in carbon sequestration in forests, land leasing has become a increasingly common phenomenon. Countries with a shortage of land lease large tracts from countries with a surplus, in theory. They can then use that land for forestry, food production or resource extraction, in return for cash, infrastructure, or other forms of development support.

For some, it’s a perfect opportunity to release untapped value in underused land, benefiting poor countries and rich countries alike. To others its colonialism with a new face, with land acquired through commercial contracts rather than imperial power. Either way, it’s somewhat under the radar, but happening on a pretty large scale. An area of land the size of Western Europe has been signed away in the last decade, a third of it in Africa. I’ve written about it in some detail before, so you can read that post for the detail.

Today I just wanted to mention Land Matrix, an interactive data site that maps target countries and investor countries, showing who is investing where. It’s a useful snapshot of what is happening. The site is in beta at the moment, so you may encounter a few loose ends, but check it out. 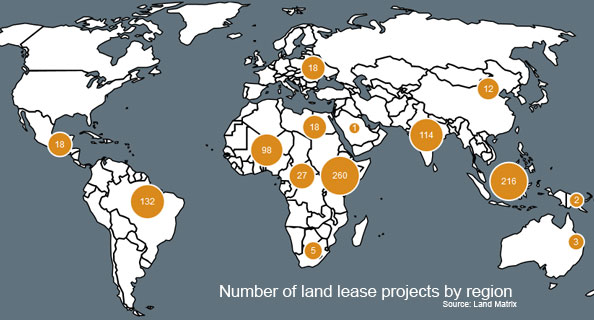