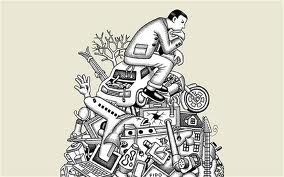 How much is enough? The love of money, and the case for the good life is a father and son effort – Edward is a philosophy professor, his father Robert is an economic historian and cross-bench peer in the House of Lords. The book straddles economics and philosophy effortlessly. It doesn’t answer the question of the title in a literal sense, but is rather “an argument against insatiability, against that psychological disposition which prevents us, as individuals and as societies, from saying ‘enough is enough’.”

The authors begin with Keynes’ futuristic essay on the ‘economic opportunities for our grandchildren’, which I just happen to have written about the other week in a similar vein. Keynes imagined a future where everyone’s basic needs are met, and they are able to pursue leisure and culture instead of working. Why didn’t this happen, the authors ask. Why are we still working so hard, when we already have so much?

Their theory is that as consumer society has developed, tendencies that have always been there in human nature have morphed from vices into virtues. Where it used to be frowned upon, the desire for money has become the central motivation of a whole civilization. There’s no single point when people sat down and decided it should be that way, but rather a number of philosophical shifts. Neoclassical economics is one. The liberal thought of John Rawls is another, which argued that there was no single definition of a good life, and that the state should be neutral towards its citizens’ aspirations. The consequences haven’t been all bad. Capitalism has delivered the goods in many ways, but we find ourselves in this strange situation, surrounded by affluence unimaginable to previous generations, but ill equipped to enjoy it.

The notion of the ‘good life’, is important here. Essentially, the authors argue that all through history, people have had a vision for what makes a good life – friendship, leisure, respect, and so on. Wealth was a means to that end, and you got rich so that you could buy yourself that better life. The difference now is that we no longer have an end in mind; we do not know what wealth is for. The “assumption that there is a good life, and that money is merely a means to its enjoyment, has been shared by every great civilization but our own” they suggest. “In the face of this massive agreement, it is our own devotion to accumulation as an end in itself that stands out as an anomaly, as something requiring explanation.”

That ‘massive agreement’ is no idle phrase, as the book draws from a wide range of sources, both Western and Eastern. It weaves its logic through Goethe, the book of Revelation, the Brahmasutras. Within two pages you might take in Machiavelli, Milton, Marx, and Diogenes of Sinope, who “lived in a barrel and threw away his only bowl after seeing a child drink water from his bare hands.” If you enjoy this kind of philosophical rockhopping, it’s a real joy to read, and reminds me of Margaret Atwood’s writing on debt. If you don’t, well, consider yourself warned.

In the process of critiquing acquisition without end, Skidelsky and Skidelsky have little time for the mantra of constant economic growth, but they reach their postgrowth perspective through philosophy. That’s an angle I’ve not considered much, but far as they’re concerned, this moral and ethical perspective on growth is more compelling than the usual two approaches, happiness economics and natural limits. The book dedicates a chapter to each of these, and their critique of happiness economics is the most thoughtful I’ve read, drawing on the definition and experience of happiness.

Unfortunately, the same can’t be said of the chapter on the natural limits to growth. They begin by saying that the famous Limits to Growth report predicted a population and resource crisis by the end of last century, using this as a springboard to bemoan the apocalyptic undertones of the environmental movement. I’ve lost track of how many times I’ve read this sort of thing, and it discredits Skidelsky and Skidelsky. The Limits to Growth model runs to 2100, not 2000, so their observation is a false one and it makes their comments sound hackneyed and secondhand. They also focus their critique around extremist green writers such as Paul Ehrlich or James Lovelock, rather than the hundreds of more moderate and considered writers in the field. Having done that, it’s not surprising that they conclude that natural limits to growth are a quasi-religious idea propagated by people uncomfortable with wealth in the first place. This is uncharacteristically weak.

“For the affluent world, growth is no longer a sensible goal of long term policy” they write. “But we regard this as an ethical truth, not as a conclusion of scientific fact.” I’d say it’s both, and books like Mark Lynas’ The God Species might set them straight on the entirely quantifiable natural limits of the carbon cycle or the nitrogen cycle. (Lynas actually draws the opposite conclusion – that the limits to growth are a scientific reality, but not an economic or ethical problem.)

But let’s put that aside, as sustainability is clearly not the authors’ area of expertise. The concluding chapters attempt to define ‘the good life’, the worthy goals of our pursuit of wealth. They narrow it down to seven things: health, security, respect, personality, harmony with nature, friendship, and leisure. This is what wealth is for, and if we lose the end goal, we may sacrifice these things in the pursuit of an empty ‘more’.

How does that perspective translate to actual policy? There are some old friends among the ideas here – limiting advertising to slow the creation of new wants, focusing on ending inequality, shorter working hours and more leisure time, the citizen’s income, localism, and ending the dominance of finance, which they describe as “in love with itself, but increasingly bereft of useful things to do.”

Whatever you think of those specific proposals, it’s not enough to shrug off the question, say Skidelsky and Skidelsky: “simply to blunder on without having a view about what wealth is for, is an indulgence rich countries can no longer afford.”

I agree, and I hope How much is enough? is widely read, because it opens up a whole new perspective on the growth question. Its ecological blindspot aside, it’s a very good book.

PS.  I was pleased to see that Ed Miliband read it this summer. A couple of years ago he read Tim Jackson’s Prosperity Without Growth too, which would be a fine partner volume to this one. I won’t hold my breath that he’s about to take the Labour party in a new postgrowth direction, but all in good time…