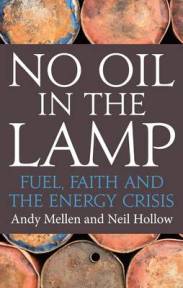 As a Christian, one of my enduring frustrations has been the church’s lack of engagement in the world’s biggest problems. We’re on board with poverty, depending on denomination. Climate change is creeping in there, biodiversity loss has a miniscule presence. But resource depletion or economics? Nowhere to be seen.

Being used to the silence, it’s always great to come across individuals with an interest, and this year has seen the publication of two books addressing oil depletion from a Christian perspective. The first was Sam Norton’s Let us be Human, and now No Oil in the Lamp: Fuel, Faith and the Energy Crisis, by Andy Mellen and Neil Hollow.

The authors say the purpose of the book is to raise awareness of oil depletion among Christians and to suggest some practical solutions. It does both of those and more besides, as this is a more comprehensive and analytical book than I expected. It is full of well researched comparisons of different technologies, with detailed sections on different renewable energy sources – all described with non-technical clarity. It anticipates questions and common objections and addresses the oil situation in its full environmental and economic context.

It’s also a very balanced book. The authors don’t delve into the gloom the way many oil depletion writers do, neither do they describe some utopian localist future. They do have a recommended solution though, in the form of the Transition Towns movement. It gets a whole chapter to itself, explored through the Transition tools of future scenarios. And like me, they recognise a parallel between Transition Towns and the idea of the Kingdom of God, both of which “invoke a powerful vision of the future.”

The authors dip a toe in the theology, but they admit that they set out to ask if there is “a specific Christian response to peak oil” and concluded that there probably wasn’t. The Bible doesn’t offer any specific guidance on the matter, being written before the fossil fuel era. What it does do is give us the values that we should be operating by – justice, community, simplicity, stewardship. Those values make oil depletion into an ethical issue that Christians should take seriously.

“The Western world’s addiction to oil has led to corrupt governments, economic havoc, environmental destruction and human made climate change. Christians have been complicit in this misuse and exploitation of the earth’s resources. However, at its best, Christianity has been a faith centred on simplicity, sacrifice and a passion for social justice. We have therefore much to contribute to shaping a post-oil society.”

If we want to take responsibility for our own energy use, there is a chapter of practical approaches, and the authors also address some of their solutions specifically to churches. Many churches depend entirely on cars to get their congregations to services, and they ask if anything can  be done about this. They raise the question of short term missions in an age of expensive air travel. There are case studies of churches insulating their buildings or installing solar panels. Both authors are able to speak from experience too, with lots of projects of their own on their respective houses.

No Oil in the Lamp is a great starting point for Christians who have heard about peak oil but never quite looked into it. (If you’re wondering about the title, see Matthew 25) But it’s also one of the best books I’ve read on oil depletion generally.