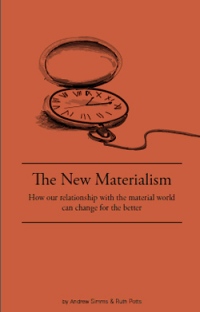 ‘Materialism’ is generally considered to be a negative – a preoccupation with stuff. It’s synonymous with consumerism, the endless quest for more and better things. It’s the driving force behind our throwaway culture, and psychologists tell us that it’s bad for us. People who are obsessed with possessions are less happy that those that choose to occupy themselves with people and relationships.

Despite the problems of materialism, we remain three-dimensional living creatures who engage in a material world in a thousand ways every day. We eat, we walk around, we sit on things and move things about. We can’t disengage ourselves from the world of matter. (Unless we live in some form of Matrix-style virtual reality, as Stefan posted in the comments on yesterday’s post.) So what we need is not less materialism, but a healthier relationship with the material world.

That’s the theory behind The New Materialism, a project from Schumacher College. In a pamphlet written by Andrew Simms and Ruth Potts, they argue that we should take a more active attitude to our things. They’re not just there to consume. Rather, we should love them, share them, maintain and fix them. We should get the most out of them, and dispose of them as best we can when they have finally bitten the dust.  This, we would find, is “a more deeply pleasurable, and also respectful relationship with the world of ‘things’.”

This ‘new materialism’ is already evident as a cultural phenomenon, they argue. You may not have noticed, but the shoe repair chain Timpson has seen business go up since the financial crisis, and there’s been a big rise in sewing machine sales since 2008. Collaborative consumption, where people share or rent out their possessions, has boomed. Wearing secondhand, sorry, vintage clothing is not just socially acceptable, but fashionable. Craft and maker fairs are popular.

I’d hestitate to herald this as the end of consumerism, but these are important trends that should be nurtured into permanence. There are several reasons why. Sharing and repairing means less consumption of materials, and a lower ecological impact. It also builds community. Owning quality things that we care about is much more rewarding than the transient and disposable objects we’re more used to.

There’s also a postgrowth angle here. As I’ve written before, the most important aspect of a postgrowth future is the reduction of material growth, rather than economic growth per se. A culture of using things well, maintaining them and sharing them is a vital part of building a sustainable economy. And, as Simms and Potts suggest, it may help the economy along the way. “There is a big economic problem raised by the shift from a consumer economy” they write. “In an economy dancing on the edge of recession and the spectre of rising unemployment, how do you boost demand – the one thing that most economists agree is needed – without increasing wasteful and unsatisfying consumption?”

One way to stimulate the economy in the short term without destroying the biosphere is to invest in this transition. Rather than endlessly prop up the banks, we could train people in repair and craft skills, creating employment and boosting demand. Rather than build more roads, we could do what London is doing and invest in cycle lanes and public transport. “Maintenance, quality and entertainment may be the watchwords by which we boost the economy through a great transition to an economy that supports more with less.”