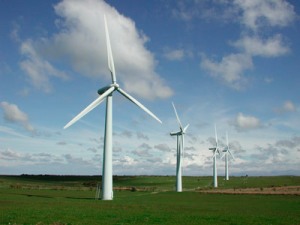 2012 was a record year for wind power, with global wind capacity increasing by almost 20%, according to the complied figures from the Global Wind Energy Council.

44,771 MW of new wind energy came online, with China once again accounting for the largest part of that. 30% of new installations were in China, giving the country over a quarter of the world’s wind power.

Britain added 1,897 MW of new capacity in 2012, despite the best efforts of the anti-wind brigade. Roughly half of that was offshore, a sector where Britain is the world leader. Last year Britain’s offshore capacity expanded to just short of 3GW, which is over three times the capacity of Denmark in second place.

2012 was also notable for the first major wind project in Sub-Saharan Africa, a 52 MW wind farm in Ethiopia.

Viewed in isolation, these figures all look quite encouraging, but do they add up to the energy revolution we’ve been hoping for? We need to put them in context. 44,771 MW sounds impressive until you hear that there are 1,401,268 MW of new coal power in development right now. That’s five times more than all the wind power in the world, and coal power is growing faster than renewable energy even when you bundle in solar and all its other forms.

So no, there’s no clean energy revolution on the horizon just yet. “The world is still failing to put the global energy system onto a more sustainable path” says the IEA. “Fossil fuels remain dominant in the global energy mix, supported by subsidies that amounted to $523 billion in 2011, up almost 30% on 2010 and six times more than subsidies to renewables.”