If you’ve ever paid any attention to the annual reports of the big energy agencies, you may have noticed a trend: forecasts of future oil supply have been dropping. The expectation that future oil demand will be met is being slowly undermined. We haven’t quite admitted that there’s a problem yet, but the time is surely coming. 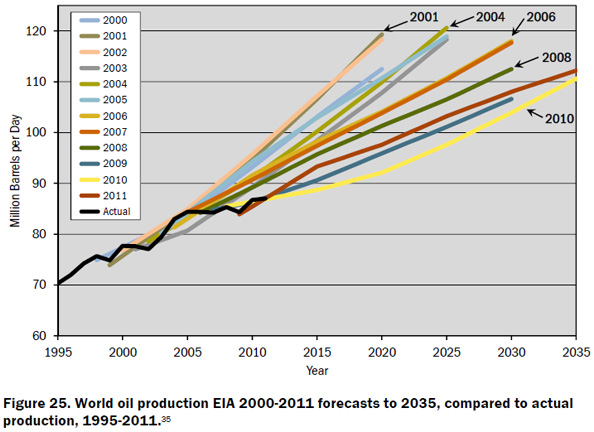 Here’s a comparison of the Energy Information Agency’s forecasts for the past decade, alongside actual oil production, as mapped by the Postcarbon Institute. (I’ve previously posted the IMF’s similar exercise) It suggests the agency has been wrong since about 2005, but perhaps is getting gradually more realistic in its expectations with each passing year.

It also shows a consistent but declining optimism. It’s okay to be wrong sometimes, but to be consistently wrong should give us pause for thought – do we actually want to base policy on the EIA’s guidance? The US does. Britain tends to base its judgements on the International Energy Agency instead, which is marginally less optimistic, but still regularly wrong. Those two confusingly similar agencies, the EIA and the IEA, provide the basis for most of the world’s energy planning. But what if they’re not doing a very good job? If you’re working with bad information, you are going to make bad decisions.

There’s a parallel here with the financial crisis, where the credit ratings agencies kept handing out triple-A ratings to investments that were actually seriously compromised by sub-prime debt. A whole lot of money was lost because these institutions were consistently wrong about risk.

Bad information will guide bad policy on oil too. An ongoing over-optimism about oil will delay the strategic planning beyond oil that all countries should be doing. In Britain for example, the government wants to stimulate the economy with an ambitious new road-building programme, when that money could be better spent on the rail network, urban transit systems, and other investments that will reduce our oil dependence.

Interestingly, one country that doesn’t follow the forecasts of either the EIA or the IEA is China, which has a National Energy Agency of its own. They report in Chinese, which means that most of us can’t read their briefings to see how their forecasts compares to the information we’re getting, even when they’re made publicly available. So far they haven’t attempted a big global energy outlook like the other agencies publish each year either, focusing instead on shorter term projections to guide China’s five years plans. However, that is due to change this year, with China’s energy agency due to release their first global energy outlook. If it happens, we’ll have a valuable third perspective, and we may discover that China is working to a different vision of the future than the rest of us.