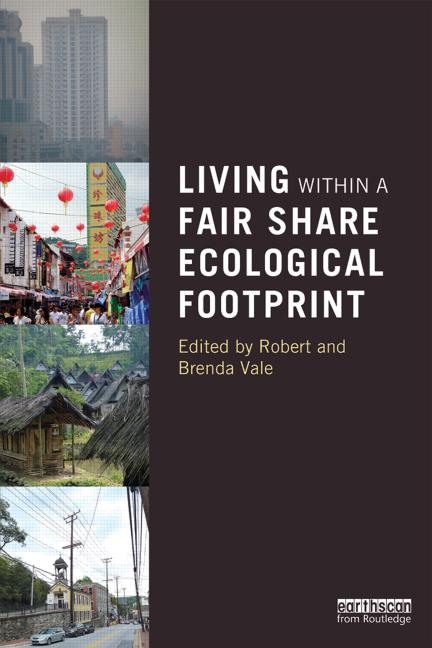 I’ve already written a couple of posts drawing on this book, which I’ve been reading slowly over the last few weeks. Slowly because there’s a two month old in the house, but also because this is a book that deserves close attention.

It’s a study of what life looks like lived according to a fair share ecological footprint. A ‘fair share’ is an equal slice of the earth’s biocapacity, or as I’ve described in more detail elsewhere, 1.7 hectares of productive land each. Equitable sharing of the earth’s resources and services is the only viable starting point if we value justice along with long term sustainability, so the book gives us a pretty important idea of what we should be aiming for.

Most of the world lives within a fair share ecological footprint already. Some are a good way below it, and then there are overdeveloped countries that are consuming considerably more. The book is aimed largely at readers in that latter category. “Starting with a world already in overshoot” say the editors, Robert and Brenda Vale, “equitable sustainability implies that wealthy countries should already be implementing plans to reduce their per capita ecological footprints – by up to 80 per cent. Major reductions in throughput by the wealthy are necessary to create the ecological space needed for justifiable consumption growth in developing countries.”

Indeed, a while many people have spotted that awkward reality, this is one of the better attempts to quantify and define the task. A series of chapters by relevant experts explore how ecological impact can be reduced in various areas such as food, travel, homes and government services. There are case studies of communities living within a fair share footprint, drawn from a variety of places and cultures.

One of the strengths of the book is that it’s relatively academic in its approach, so it’s got the numbers and the authors show their work. There’s a risk that you might get bogged down in, for example, two pages of mathematical calculations working out the embodied energy of ballast for railway lines, but you know exactly what is being measured and how. It’s rigorous, and the end figures here are all the more meaningful for it. And casual readers can always skip the maths.

Another big positive is that the compilers have worked hard to bring together an international cadre of experts. They’re based in New Zealand and most of the contributors have a NZ connection, but it’s great to find writers from Thailand, China, Vietnam and elsewhere. As the chapter on Thailand demonstrates (more on this soon), different cultures have different understandings of sustainability, different language and mythology to draw on, and it gives a richer picture of what an ecologically balanced lifestyle might be.

There’s also a valuable emphasis on practical solutions, and the case studies are enlightening. One chapter looks at how an urban university could cut its ecological footprint by 25%, 50% or 90%, depending on its ambitions. Their options are presented on a table, with a series of increasingly radical proposals. At one end there are simple things like energy saving lightbulbs and switching to recycled paper. At the other are plans like lowering the ceilings to reduce the space to be heated, and replacing all foreign travel with teleconferencing. It’s educational to see these options set out – it’s not easy, but entirely possible for an institution to reduce its footprint by 90%. This, the books suggests, is what it would look like and how it could function.

Some chapters are weaker than others. The chapter on consumer goods is rather short and vague. It focuses on encouraging shoppers to buy less stuff and doesn’t mention any of the multiple emerging solutions around sustainable design and recycling. Another chapter makes the observation that life in many developed countries was largely within a fair share footprint in the 1950s, and attempts a comparison with our modern consumption habits. The problem is that the information about life in the 50s is drawn from interviews with just 30 people, which is hardly a large enough sample. The author acknowledges that, but it felt very anecdotal compared to other sections.

Living within a fair share ecological footprint isn’t really aimed at a general readership and will probably end up in university libraries, but its contribution is important. ‘Sustainability’ is a term that is bandied about all the time, casually applied to anything that is slightly better than the usual, however marginal the improvement might be. This is a book that corrects that mis-use, setting out exactly what a sustainable lifestyle actually entails.

One lesson that stands out is that we cannot tinker around the edges of our consumerist lifestyle until it somehow becomes sustainable. It’s a much more radical prospect than that and however much we may resist the idea, it involves behaviour change as much as technology. At the same time, a sustainable way of life is possible. We can do it, we know how, and it would not leave our way of life so unrecognisable that we should fear the idea.