Yesterday the world’s first synthetic beef burger was cooked and eaten in a demonstration event. It was prepared by chef Richard McGeown and tasted by its creator and a couple of special guests. The general consensus was that it tasted alright, although since it was grown without fat, it lacked the juiciness that normal beef would have. 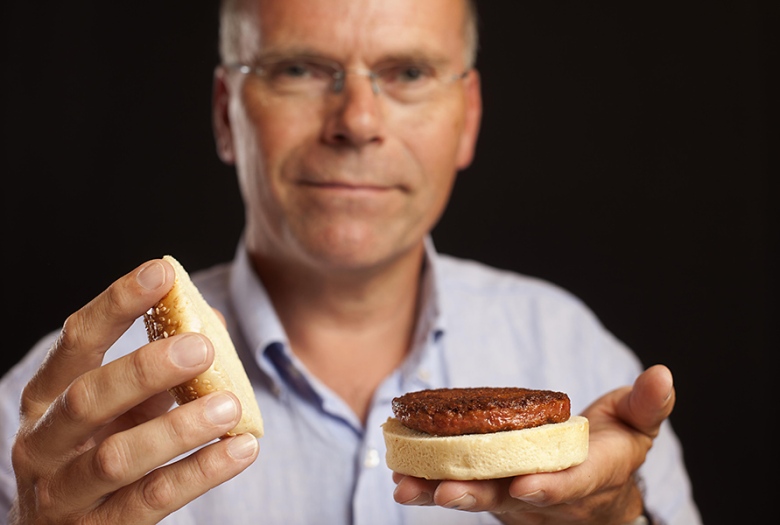 What they were eating was a meticulously created burger made from 20,000 strands of ‘cultured beef’ grown in a lab at Maastricht University. It has taken three months to make a single burger and cost €250,000 – paid for, it transpires, by Google co-founder Sergey Brin.

Brin is motivated by animal welfare concerns, as no animals need to be slaughtered to create synthetic beef. I didn’t realise this, but cells can be harvested through a harmless biopsy. According to the team behind the project, 20,000 tonnes of beef can be made from a single sample. Since you can make so much beef from the original cows, those cows can be farmed in the best possible conditions. The donor cows here were from an organic farm in Belgium.

The benefits are much broader than animal welfare. The biggest is land use. Raising cows for beef is a land-intensive process and is one of the big drivers of deforestation. Beef produced artificially uses a tiny 1% of the land required for conventional beef farming.

Then there are the emissions. Cows are a major source of methane, and some studies suggest that raising lifestock is more damaging than transport as a source of greenhouse gases. Synthetic beef produces 96% fewer emissions.

So what’s not to like? It’s not GM, if that’s a concern. There are no chemicals involved and no mad cow disease. Yes, it is one step further in the disconnection between what we eat and where it comes from, but most people get their beef in cellophane in a supermarket anyway, so it’s a little late for that.

The main objection is surely that it is fake, an objection that will trouble some and not others. I can see the argument, but it’s hardly going to replace normal beef entirely for those that want to pay a premium for it. Most people eating cheap beef pay little attention to how it was reared, which is why food producers have been able to get away with feeding us horse meat on the sly.

What’s more, between now and 2050, demand for beef is expected to rise by 70%. There is simply no way that demand can be met. Some will say we need to eat less meat, and they’re right. We in the West do eat too much meat and suffer the consequences. But this growth in demand is mainly going to come from the emerging middle classes of Asia. Who are we to tell people they can’t eat meat while we do? Synthetic beef would allow the nine billion of us to eat beef if we so desired. It would also free up the grain harvests currently going into animal feed, so it’s potentially a real bonus for food security on a crowded planet.

It would be a mistake however, to assume that the advent of cultured beef means that we can harmlessly carry on as we are. Ultimately we ought to be eating less meat even if there was no climate change, food security concerns or animal welfare concerns. We should be doing it for our own health.

And of course we do have all of those problems, and we can’t wait the estimated “10 to 20 years” before these sorts of meats are available commercially. Climate change is more urgent than that, so we still need to reduce the ecological impact of our diets.

In short, this development doesn’t change anything right now. But it does offer us a potential technology for the future – not a silver bullet or a technofix, but one more useful tool. Like Carbon Capture and Storage, or Nuclear Fusion, or any number of other technologies, we should be investing and experimenting. But we should not depend on them, using them as excuses for putting off the behaviour changes we need today.