We often hear the fact that if everyone lived like we do in Britain, we’d need three planets. Or that a world full of Americans would need five earths. What we hear less about is how that’s possible, the countries that are consuming below their biocapacity, freeing up more resources for others.

The annual Earth Overshoot Day fell this week, marking the point at which we have used up this year’s ecological budget and gone into the  overdraft. This year the team posted the set of graphs below. They show the biocapacity of six countries that aren’t using their full complement of resources, but each one tells a more complicated story.

Australia and Canada are both developed countries. The ecological footprint of citizens (the red line) is holding pretty steady, or declining slowly in the case of Australia. In developed countries, it should be declining as the economy becomes more efficient, better at recycling and waste management. But in both cases, biocapacity is still falling. The rate of decline in Canada appears to be slowing however. Sweden is losing biocapacity more slowly again, but that needs to level off at some point to avoid problems in future. And consumption in Sweden is still very high. (As John points out in the comments, this is biocapacity are per capita, so the rise in population in Sweden may explain this apparent decline)

Brazil certainly has an export-led economy, but it’s starting from a lower base and poverty is still a big problem. We’d expect to see ecological footprints rising slightly, although this single graph doesn’t give us any clues about equality of consumption. It’s also worth noting that the fair share we should be aiming for is 1.7 hectares per person. Brazil is already slightly above that.

Footprints in Indonesia are within that 1.7 hectares ideal, but consumption is rising faster while biocapacity is in steep decline. Unless the draining of wetlands and cutting of forests can be put onto a sustainable footing, those lines are going to cross over in the next few years and Indonesia will be in overshoot.

The saddest case here is Madagascar, which has the worst of both worlds. Its biocapacity is falling sharply as its natural resources are exploited, but the footprint of its people isn’t rising. As a very poor country, this isn’t because they are recycling and getting more efficient. It’s because someone else is getting the benefits. Madagascar is being plundered. 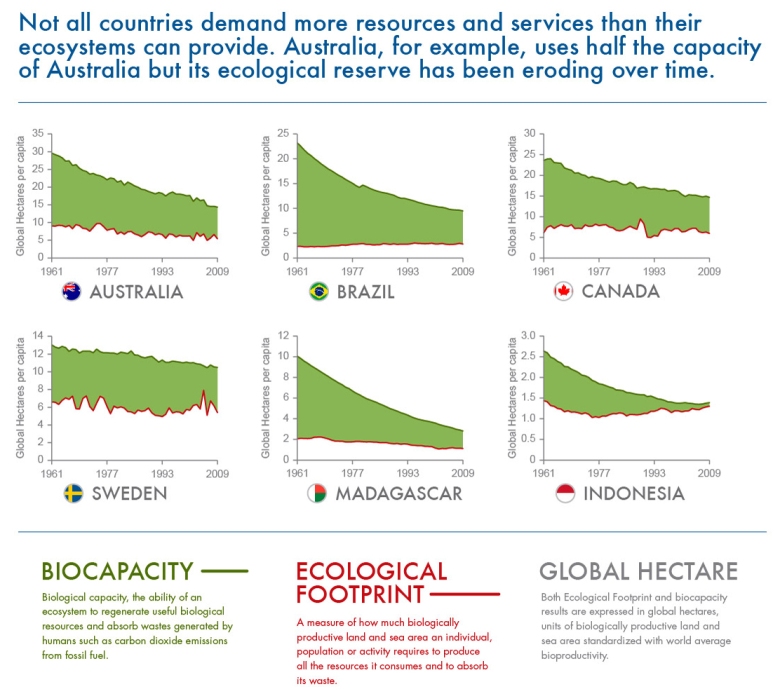