The Atlas of African Agriculture Research and Development is a new publication from the International Food Policy Research Institute. It might sound somewhat specialist, but it’s quite fascinating, especially if you enjoy maps. It’s also important, because Africa remains the continent with the most frequent and most serious famines, and yet it has large areas of unused arable land. Much of the land that is under cultivation is very basic or even subsistence level, with small family farms that get by without the advantages of modern technology or fertilizers. And climate change is already making agricultural conditions more challenging.

Raising food production in Africa will improve food security and create new economic opportunities, and the atlas does a fine job of communicating some of the opportunities and the obstacles. One map that struck me was this one. It shows the travel distance to the nearest port. 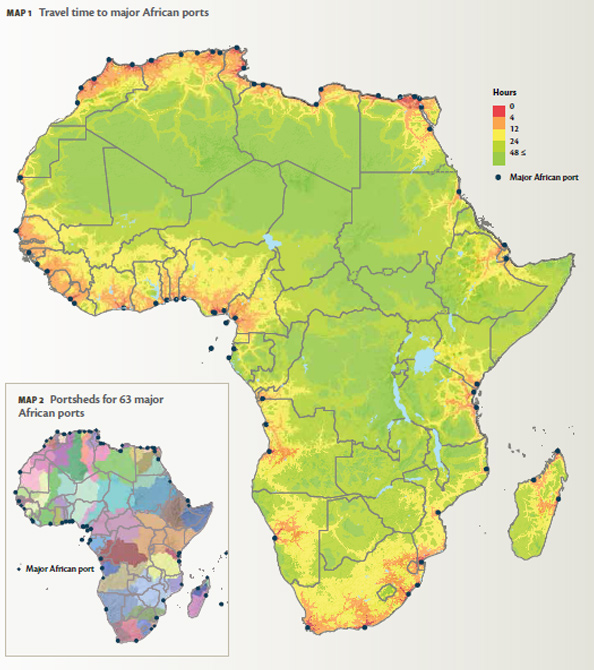 The orange areas have the best port access, and South Africa and the West are well served with ports. East Africa has fewer options, with the long empty coastlines of the Horn of Africa notably inaccessible. It’s the big green areas in the middle that are the problem, where the yellow veins of transport corridors don’t penetrate. That cuts those regions off from global markets, or at least raises the transport costs considerably and makes it much harder to turn a profit. It also deprives them of imports, including the aforementioned fertilizers and technologies that could raise food production.

The map also highlights the plight of landlocked countries. Look at the belt of green across the Sahel, through Mali, Niger and Chad – three huge countries with no ports and major transport difficulties. It’s easy to see why development economists such as Paul Collier single out landlocked countries as particularly vulnerable, especially those with volatile neighbours as their only route to the sea.

Maps like these give us a fresh perspective on poverty and development, and where we might be able to lend support. They show us which areas are at risk of being left behind, and where infrastructure could be prioritized.