You know those photos of the earth from space at night? The ones with streetlights of the global north aglow?

You’ve probably seen that before, but I recently came across one that looks rather similar. Anyone want to guess what this one shows? 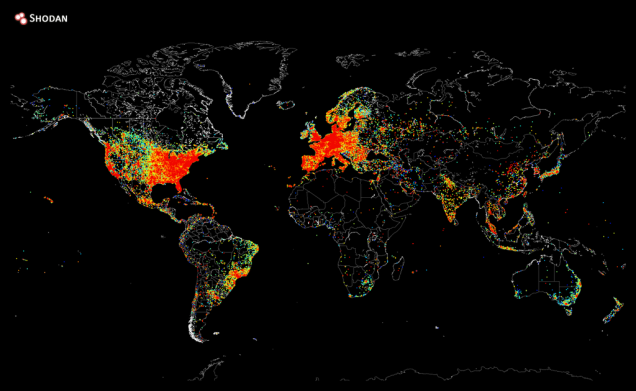 This is the number of devices connected to the internet, compiled by ‘internet cartographer’ John Matherly.

Just like electric light, there are major clusters around the richest parts of the world. It’s a reminder that while we talk about the revolutionary impact of the internet, it’s important to note that it isn’t yet a global phenomenon. For some parts of the world, internet access is still a major luxury if it’s available at all.

Of course, with images like these two above, the question that comes to mind is what it might look like if everyone had the same access to electricity or the internet. For that, you need a map of human population density.

It’s an interesting comparison, don’t you think? Australia, the Sahara and the Amazon are still dark, but China and India suddenly dominate the map. Give it a few years, and NASA and John Matherly’s maps are going to look like historic curiosities.