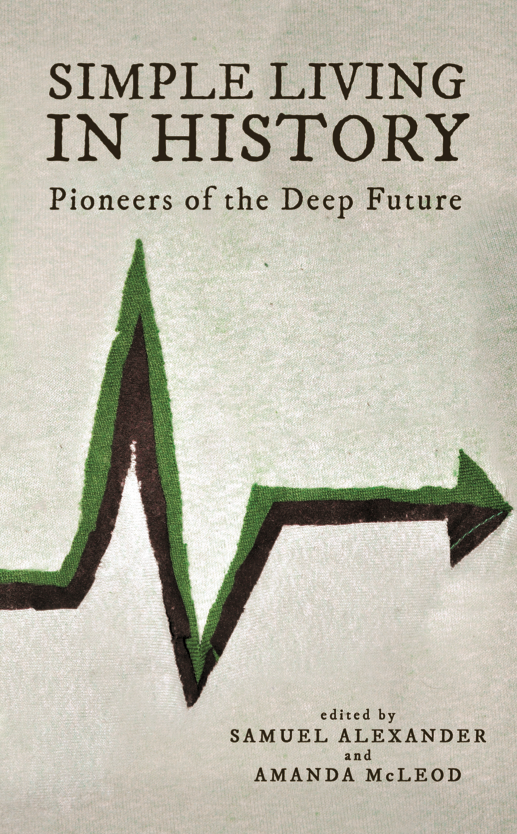 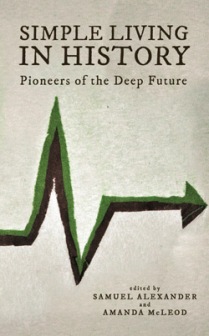 Simple living, paring back our lives to focus on the things that matter most, is not a new idea. All through history people have advocated simpler living – for happiness, for virtue, for God, or for the earth. It’s always been there in our wisdom traditions. It may be more important now than it has ever been.

That’s because in the past, simple living was a matter of wisdom and a lifestyle choice. Today it may be a matter of survival. As the climate changes and resource stocks deplete, we are being forced to re-consider our assumptions about development, and the stories we tell ourselves about the good life. Simpler ways of living may be inevitable in the not too distant future, and the more deliberate we can be about it the better.

That doesn’t mean we need to return to some mythical pre-industrial golden age. As editors Samuel Alexander and Amanda McLeod say in their introduction, living differently “means drawing on the wisdom of the ages in order to advance beyond consumerism; in order to create something better, freer, and more humane.”

Presented chronologically, Simple Living in History is series of essays from a range of contributors. It begins in 500 BC, give or take, with the life of Buddha, and ends in the present day with Transition Towns and the degrowth movement. In between it takes in the Stoics, medieval monasticism, the Amish, Gandhi, John Seymour and many more. It’s an intriguingly diverse collection of people.

The focus here is more on philosophy than practice, although there are some contributing practitioners. It’s about the why, the reasons that people have chosen to simplify. We might associate the current movement with ethical concerns around consumerism and the environment, but previous groups or thinkers have emphasised very different reasons. For Aristotle or Henry Thoreau, it was all about meeting your economic needs and then having time for more interesting things. The Stoics simplified in order to live a considered and rational life. Gandhi or Ivan Illich saw simplicity as vital for equity and empowerment. For William Morris or the Ditchling Villagers, it was as an aesthetic project as much as anything, a way of life that valued beauty and creativity.

Reading this variety of reasons, the number of approaches to the same basic idea, I couldn’t help but think how shallow consumerism is by comparison. The individualistic materialism that defines our culture is not a philosophy to live by. It’s almost the opposite – the important thing is not to think, not to ask questions, to run with the promptings of your own self interest, immediately and exclusively.

That’s why the book closes with a chapter on ‘mindfulness’. If there’s one thing that unites the various strands of simple living, it is the call to live a ‘considered life’, to pay attention to the way we live and its consequences. That’s an important message in our age of distraction.

Needless to say, you can take or leave a lot of the ideas here. The book includes some extreme examples, such as Diogenes, who lived in a big clay pot and threw away his only cup after he saw a child drinking with his hands. Some of the arguments are products of their time or come with a gender politics we wouldn’t want to endorse. Some forms of simple living seem perverse or unnecessary – like the Amish using expensive propane refrigerators and rejecting electric ones.

The point is that there’s no one example in the book that we should seek to emulate, no model for simple living. Their stories and teachings are there for us to learn from, to draw inspiration from as we shape our own life according to our own circumstances and priorities.

In the interests of mindfulness, I’d recommend reading the book slowly. (I didn’t as it happened, but I have a backlog of review copies to get through.) Chapters are short and you can read them in one sitting, so dip in and out. Read a chapter and then hold its ideas for a while before moving on to the next. See what resonates. There’s lots to learn here, and lots to reflect on.