A couple of weeks ago I mentioned the Living Planet Report and wrote that it contains two of the most important graphs in the world. The first shows the earth’s biocapacity and how we are overshooting it. The second is this one: 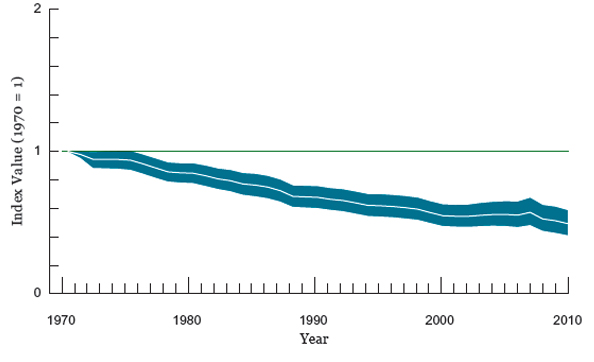 This is the Living Planet Index. The index takes trends in 10,380 different populations of mammals, birds, reptiles, amphibians and fish, some 3,028 vertebrate species in total, and amalgamates the data into a single figure for global wildlife. By tracking this over time, we can see how the world’s wildlife is faring.

The results are pretty shocking. Since 1970, the world’s wildlife populations have halved.

I find that quite extraordinary. What is also extraordinary is just how unaware we are of what we’re doing. (And it is our doing. The leading causes of this decline are exploitation through hunting and fishing, habitat degradation, and habitat loss.) You might think a finding like that would make headlines, but coverage was pretty muted. It got a mention here and there, even on the front cover of the i and the Telegraph, but the media were busy picking over the Conservative party conference. Any attention it got was rapidly eclipsed by politics, ebola or IS, the curse of any long-term, big-picture story in the eternal ‘now’ of news culture.

Obviously there’s a fairly wide margin of error here, since nobody is going round counting every animal in the world. And it’s easily misunderstood – an average decline of 52% across wildlife populations doesn’t necessarily mean there are literally half as many animals in the world, which is what some reports imply. Neither does it mean that half the world’s species have gone extinct. The decline is much more pronounced in some parts of the world than others.

But whichever way you square it, the fact remains that children today are inheriting a less vibrant, less wild, less alive planet than the one their parents were born into. And that is a tragedy.