Unmanned aerial vehicles have something of a PR problem. When they’re in the news, nine times out of ten it’ll be an attack drone, probably delivering American foreign policy from the sky. 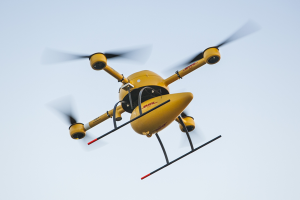 There are many other uses for UAVs. The police can use them in surveillance or to monitor traffic. Farmers can keep an eye on fields and plant health with drones. They’re increasingly used in film and TV work to provide aerial footage. They can cover a lot more ground on a nature reserve than a ranger patrol on foot. The UN flies drones to follow rebel movements as part of its peacekeeping mission in DRC. There is growing interest in using them for transport, with Amazon talking of small quadrocopters landing your delivery on your driveway an hour after you placed your order.

For all the sci-fi connotations, drones aren’t just something for Wired readers to fantasize about. There are some potentially useful applications in poorer countries that are worth taking seriously, and a couple of early projects in Africa.

Much of Africa is unconnected – unconnected to everything. That’s roads, railways, electricity, and the internet, and the further inland you go, the bigger that problem becomes. Developing a national grid, hooking up a telephone network, or building a highway system is a huge infrastructure problem in a large and poor country. You could fit Britain into Sudan four times over. It’s hard to imagine it ever having European or American style infrastructure outside of major towns and cities.

That’s not going to be a problem on the energy front. Renewable energy can be installed at the micro level, so we can already leapfrog the distribution systems of the West, with their power stations and pylons. Mobile phones have made the telephone network obsolete in some places, and unnecessary in areas that didn’t have one. UAVs offer a couple of similar leapfrogging opportunities.

One is in internet coverage. Good quality broadband still requires cables, and it’s been hard enough getting undersea cable to the continent itself, let alone out into the more remote parts of Africa. The Internet.org Project is aiming for universal internet access, and is looking at using UAVs. A network of solar powered drones circling at high altitude would be cheaper than both satellites and on-the-ground cabling.

Earlier this year there were rumours that Facebook were buying a solar drone company for this specific purpose. After all, bringing the internet to Africa would also bring Facebook to Africa – a necessary step for a grow-or-die corporation whose product is hitting saturation point. Google’s Loon Project is a similar idea, using high altitude balloons. Whether it’s one of them or someone else that actually delivers it, the chances are pretty good that someone accessing the internet from the African interior in ten years time won’t be doing it through a fibre-optic cable.

There’s a more radical idea for UAVs being discussed too. If it’s uneconomic to build roads to every tiny town and village across the vastness of Africa, is there a role for small cargo drones to fly in vital supplies? That’s the thinking behind the modestly titled Flying Donkey Challenge, which has a vision for hard-wearing transport drones that can move “at least 20 kilos over 50 kilometres in less than one hour.” That’s a suitcase-sized load of medicines and blood supplies, or letters and parcels. Or yes, Amazon deliveries.

It sounds unlikely, but advocate J M Ledgard says the most direct comparison is the motorbike couriers that run things to remote villages along footpaths – or donkeys, which is where the challenge gets its name. The challenge is to design a UAV that is rugged and easy to maintain, and that can be fixed locally when it goes wrong: the Nokia 1100 of drones. It’s also worth remembering that more remote hospitals, research stations or missionary outposts are already served by air. Two of my former room-mates from boarding school are now pilots in Africa. Without wanting to do them out of a job, drones flying cargo routes into such places would be much more affordable, and more people would have access to that kind of transport.

There are already businesses prepared to bet that transport drones will work as a commercial venture, so this isn’t an idea that depends on philanthropy or outside support. African engineers are as likely to develop the technology as Silicon Valley is. The biggest obstacle to UAVs in Africa is exactly the same one as it is here – how do you regulate the airspace? South Africa recently moved to halt the use of camera drones, and a Flying Donkey trial route paused in Kenya this year while permissions are sorted out. The House of Lords is currently discussing the regulation of drones, so this is an international conversation at the moment.

But give it a few years, and perhaps UAVs will have joined the long list of things – like microwaves or GPS – that began life in the military and became common everyday technologies.

If you want to know what it might look like, here’s Google’s experiment in the Australian outback: