A couple of weeks ago I took a tour of our local primary school, getting ready to send Zach there next year. It’s part of the eco-school programme, I was pleased to discover. There’s solar and wind power onsite, kitchen gardens, chickens and composting bins, all looked after by the children. They’re doing a fine job, and it made me curious – what’s the world’s most sustainable school?

There is in fact an annual competition to answer that question, hosted by the Center for Green Schools. The 2014 winner is yet to be announced, but there were joint winners in 2013. They are Sing Yin Secondary School in Hong Kong, and the Waterbank Primary School at Nyiro Primary School in Kenya. Sing Yin is extraordinary and well worth a look, but it’s Waterbank that blazes a trail for the developing world, where sustainable architecture is most important.

Most Kenyan schools are built in a similar style – breezeblock walls, tin roofs, classrooms in a row with a porch along the front. The team behind the primary school in Nigare Nyiro took that design as a starting point, guaranteeing that their new concept could be built using local materials and expertise, and that it would cost the same to build as a normal primary school.

The innovation came in rearranging the basic elements to create multi-purpose infrastructure. They moved from a peaked roof to a sloped one, grouped the buildings into a square and designed a school that functions as an integrated freshwater system – hence the ‘waterbank’ school.

Rainwater runs off the roofs through a ceramic filtration system and into an underground reservoir underneath the central courtyard. This can provide 350,000 litres of clean water in a arid part of Kenya. The courtyard itself doubles as a theatre. Around the sides are classrooms, rooms for teachers, and a general purpose space for community clinics and workshops.

Using the traditional African ‘boma’, the whole school is circled by a high wall. The wall keeps elephants out, and nets across the top keep out insects. This makes sheltered growing spaces for community gardens, irrigated by the rainwater catchment system.  Classrooms have louvred walls that open up into the gardens, so that teaching can more indoors or outdoors. They also allow teachers to regulate the indoor temperature. 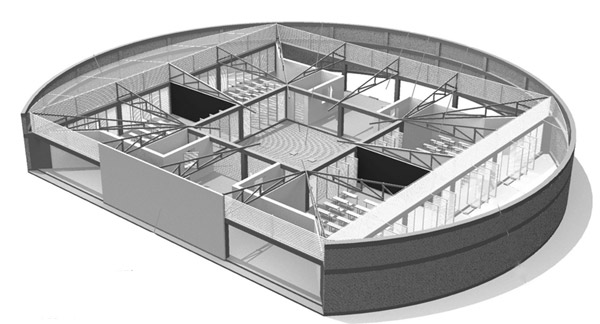 Since the school opened in December 2012, attendance has risen to 95%. Children no longer go on long walks to fetch water. Since it was usually girls that were sent on such errands, that means more girls are in school. As the water is filtered and clean, incidences of water-borne illness have all but disappeared. It should also help alleviate tension over water access next time there is a dry spell, something the community has experienced before.

So there it is. The world’s greenest school. Pretty impressive.

Here it is on opening day. That large blank white wall? That’s deliberate too – it’s for projecting films onto for community film nights. 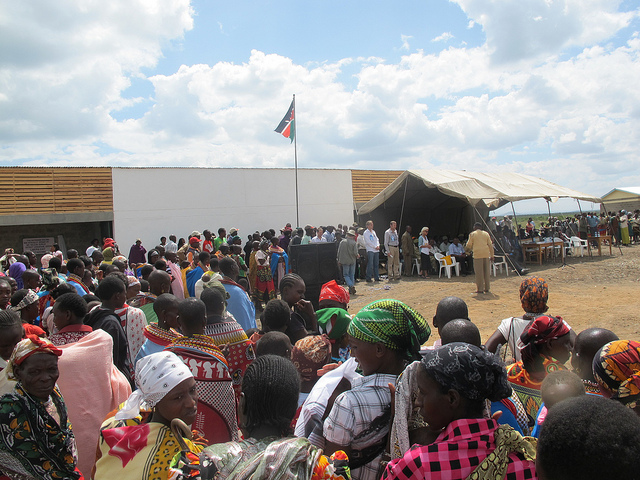 The Waterbank school is a project from PitchAfrica and Atopia Research. PitchAfrica have a bunch of other multi-purpose water-harvesting buildings that I will have to come back to another time. They will also be building more Waterbank schools. You’ll find them on Twitter here.