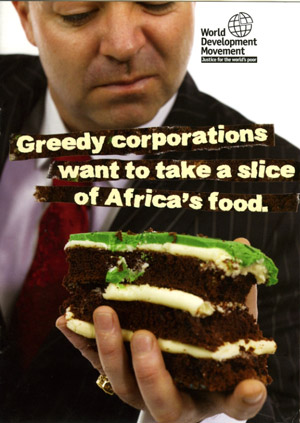 Last week I got the latest mailing from the World Development Movement. They’re an organisation that does some useful work, their campaign on the tar sands in Madagascar being one that I personally got involved in. But their latest mailing is on the G8’s New Alliance for Food Security and Nutrition and it made me pause.

The covering letter has a picture of a large cake in the shape of Africa, which is then carved up, accompanied by quotes from King Leopold of Belgium. The enclosed campaign booklet, titled ‘Greedy corporations want to take a slice of Africa’s food’, has grotesque full-page photos of white people in suits cramming cake into their mouths. Crass would be an apt word, but it’s the series of assumptions that troubled me.

First, it portrays all corporations in the same way – greedy, western, profit-driven companies that will grow food for export and ignore local people. In reality, the majority of the companies taking part in the New Alliance are actually African. The country with the most participating companies is Burkina Faso, with ten. One German corporation is involved, four Japanese. Britain and Tanzania each have eight.

There are big multinational corporations involved, including Coca Cola, Syngenta and Bayer, but the simple equating of corporations and western power is too simplistic. Africa has corporations too. What’s more, some of the companies involved are co-operatives or non-profits, such as the multinational NFP Global Shea Alliance or Mozambique’s ECA. Big business involvement in African agriculture is not a black and white issue.

Secondly, there’s an assumption here that corporate involvement would be a net loss to African communities, a form of colonial plunder. That is the explicit claim here: “We believe that corporations greedy for African profits represent a new colonialism.” There’s no doubt that corporates are sometimes responsible for human rights abuses – there are plenty of examples of indigenous people turfed off their land to make way for biofuel plantations. But that is not inevitable.

It is particularly extreme to draw a direct comparison between modern corporations and the plundering of the Congo under the genocidal Leopold II. It’s the development equivalent of Godwin’s Law, a hyperbolic comparison that undermines the argument. Uncounted millions of people were killed, enslaved or mutilated during Leopold’s reign in the Congo. However evil you may think Monsanto are, they are not Leopold II.

The main benefit of big company involvement in African agriculture is of course the finance. They bring major investment, infrastructure, and organisation. With the right safeguards in place, that does not necessarily need to impinge on smaller farmers. Take HomeVeg, Tanzania’s first exporter of fresh fruit and vegetables. They don’t have their own farms, but buy from hundreds of smallholders and local producers, packaging their goods for sale in Europe. HomeVeg is part of the New Alliance, and I wonder what they would make of this campaign.

Third, the alternative to corporate involvement that the World Development Movement champions is small-scale farming. It is vital that those that wish to farm traditionally are allowed to continue to do so, and that land is not confiscated or seeds controlled. But do all those scraping a living from the land really want that for themselves and their children? How many of them would gladly trade a subsistence living for the relative security of a salaried job on managed farm or a plantation?

After the suits stuffing their faces, the food sovereignty section of the flyer has pictures of Africans digging their fields with hoes. Is that the future of African agriculture? Still farming by hand 100 years after the invention of the tractor? Is that as far as our hopes for African farmers reach?

The thing is, there are concerning elements to the New Alliance for Food Security and Nutrition. It’s plan for African food production cooked up by the G8 and it is essentially rich countries telling poor countries what to do. It’s right to scrutinise it, and the UK’s Independent Commission for Aid Impact has some serious questions about how much of the aid spend on the New Alliance actually benefits food security and nutrition. Food sovereignty is a vital movement, and the rights of small farmers must be protected, and the New Alliance isn’t involving small farmers enough. So the World Development Movement is not wrong in their cause. What I object to here is the extreme language, the demonising of corporations, the idealising of smallholder farmers, and the all-or-nothing approach.

I haven’t sent the campaign card to my MP, because it calls for the UK to withdraw its support and its funding from the new alliance. I’m not sure that’s helpful, since the project would just carry on without us and we’d have lost our voice at the table. Other groups, while equally critical of the New Alliance, offer proposals for making it work better for smallholders. That seems like a more constructive approach, working with local farmers groups and African governments to ensure that there is full participation, and resisting reforms tailored to the needs of corporations.

I don’t mean to pick on WDM, and I’ve actually sat on this post for a few days, wondering if I should post it or not. If nothing else, I work with groups like WDM as a freelancer and I don’t want to upset people who I broadly agree with. But it does seem like a matter of integrity to take that risk. I don’t think justice campaigns are helpful when they use extreme language, so this is partly a plea for moderation, and a tone that is not so easily dismissed by those in power. It’s a suggestion that we engage with power, rather than try to stand apart from it – we’re not going to get a world with no big companies, but we can have one with different big companies. And finally, I long for a vision of intermediate technology for Africa. There’s got to be a middle ground between the unsustainable corporate agribusiness of the West and the back-breaking manual labour of smallholders. If we must have pictures of smiling Africans working in the fields, I don’t want to see spades and hoes. I want to see a African woman behind the wheel of her own tractor.