Yesterday I came across a new word that I can’t unsee: premiumisation. I read it in an article about Coca Cola, which is planning to move into the world of dairy with a new milk-with-bells-on called Fairlife. “It’s basically the premiumisation of milk” said company exec Sandy Douglas. It’s “a milk that’s premiumised and tastes better and we’ll charge twice as much for it as the milk we’re used to buying”.

I’d not seen the word before, but I know exactly what it refers to. It’s been a trend in the grocery world over the last decade. You take something ordinary, make a fancier version in prettier packaging, and charge more for it. 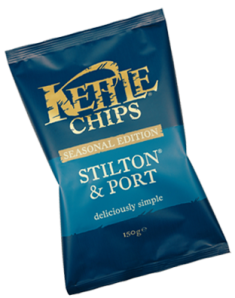 Look no further than the crisp aisle of your supermarket. Ten or fifteen years ago a crisp was a crisp, and they came in a range of flavours and we all knew our favourites. The most exotic it got was prawn cocktail. Then some smart marketers starting cutting the potato ever so slightly thicker, took it out of primary coloured packaging and started using white, black and darker shades of blue and maroon instead. The names of the flavours got longer and fancier – sea salt and cracked black pepper anyone?

Essentially, premiumisation is about adding the feel of specialness. The product may not cost any more to produce than the standard version, but you can charge more for it because it smacks of luxury. People are prepared to pay extra because it makes them feel like they’re treating themselves.

In a few years time, the milk aisle may be similarly diverse, stacked with premium versions in glass bottles perhaps, or promising superior taste or added health benefits. It’ll still be made by the cows of course, as it has been for thousands of years, but the magic of marketing will allow companies to charge more for it.

And it is magic. Sandy Douglas claimed that Coca Cola’s investment in the dairy sector would make it “rain money” for the company and its shareholders, and if raining money isn’t magic, I don’t know what is. In premiumisation we see the full glory of consumerism. If you can spot hitherto unidentified demand, and find new ways of giving people what they didn’t even know they wanted, riches will follow. And who am I to criticise? I like a caramelised red onion and balsamic vinegar crisp as much as the next man.

Well, I was thinking about premiumisation, and then I read an article about progress on a vaccine for Ebola. The good news is that we are getting there, as fast as we can. The bad news is that the science for such a vaccine has been around for a while and nobody had taken it through to a final product.

Why? because the economics didn’t make sense. As Sarah Kliff puts it in her interview with a senior ebola researcher, “pharmaceutical companies have little incentive to pour research and development dollars into curing a disease that surfaces sporadically in low-income, African countries.”

Isn’t that one of the great tragedies of capitalism? Consumers in the US have everything they could possibly want, but companies dedicate themselves to creating new products that nobody has ever asked for in order to coax more money out of them. And on the other side of the world, desperately poor people die horribly because there’s no money in creating a vaccine. In pursuit of shareholder value, the big corporations are duty bound to go where the money is. To the narrow logic of capitalism, Coca Cola’s new milk is more important than a cure for ebola – or at least until very recently. Now that rich countries are scared enough, everyone’s hurrying to finish the science.

The poor will always be invisible to a system that only measures value in financial terms. If we value human lives for what they are, not just their spending power, then capitalism can look strikingly inhuman sometimes. That’s not an argument for the end of capitalism, nor against free markets. It’s just that they are not enough. There are things free markets can do, and things they cannot do. They are useful tools, but not the only ones.