A few days ago I wrote about the hierarchy of waste and the various ways to divert useful materials out of landfill. I mentioned that of all the techniques, the one that is least known is remanufacturing. It’s not something I know much about, but neither does industry. As it turns out, 54% of manufacturers either haven’t considered or haven’t even heard of this key element of the circular economy.

Let’s start at the beginning: what is remanufacturing anyway? A parliamentary group defined it earlier this year as “a series of manufacturing steps acting on an end-of-life part or product in order to return it to like-new or better performance, with warranty to match.”

It is distinct from both refurbishing, which is largely aesthetic, and reconditioning, which aims to return an item to ‘working order’. Remanufacturing delivers a product that is ‘as new’, or in some cases better than new if there is an opportunity to upgrade in the process.

Heavy engineering has lead the way in this field, particularly through the aerospace and automotive industries. Caterpillar is one of the best known pioneers. Car parts can often be remanufactured, such as alternators, pumps or even whole engines. Industrial machines are often designed to be remade, and so are some photocopier and office furniture brands. 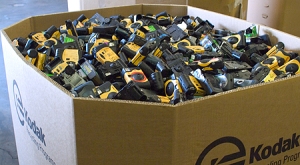 More ‘high street’ areas of remanufacturing include car tyres, which can be retreaded and sold with the same warranty as new, or printer cartridges. There are over two thousand companies across Europe that are involved in remanufacturing inkjet cartridges. And you know those ‘disposable’ cameras that people used to put on tables at weddings a few years ago? The cheaper ones may have been single use, but the better ones were always remanufactured for resale. Kodak has remanufactured 1.5 billion single use cameras since 1990.

Despite being a new term to many, it’s not a new idea and is well established in some places. Sweden has been doing it since the Second World War, and Volvo applies it extensively. It is more common in Japan, and is growing in other places. Figures for 2011 showed that the United States produced $43 billion in remanufactured goods, supporting 180,000 full-time jobs. It’s in China’s five year plan and they have introduced new regulation and standardisation to encourage more of it.

Typically, the Scottish government is ahead of the rest of the UK, and is applying circular economy principles part of its ambitious Zero Waste Scotland strategy. It announced plans for a Scottish Institute of Remanufacture in October.

There’s a reason why governments and industry bodies are waking up to remanufacturing. It cuts costs for industry, creates jobs for small and medium sized businesses, and reduces waste. Materials are reused, reducing the draw on the world’s natural resources. CO2 emissions are saved in manufacturing, and in mining and transporting new resources. Britain’s remanufacturing sector is estimated to save 10 million tonnes of CO2 every year.

There are a few complications. One is that remanufacturing is a technical definition, and since the word isn’t well known, it often gets lumped in with recycling. But it’s better than recycling, which just recaptures the materials. The absence of an internationally agreed definition means that production and export of remanufactured goods is often held back.

Public perception is another problem, as remanufactured products are sometimes considered inferior. Tyres are a case in point. Sales in Britain are still fairly low because drivers assume that cheaper retreaded tyres won’t last as long. In reality they meet exactly the same standards as new tyres, as required by law.

As the idea becomes more familiar, these sorts of problems will be overcome. Agreed definitions and standards will need to be developed to open up trade and increase consumer awareness. That’s happening, and there’s a little flurry of activity around it at the moment.

On Monday the All Party Parliamentary Manufacturing Group and All Party Parliamentary Sustainable Resources Group released Triple Win: The Economic, Social and Environmental Case for Remanufacturing, which I’ve drawn on extensively here – thanks to Michael Folkerson for alerting me to that after my previous post. Just yesterday the Aldersgate Group released a report that discusses remanufacturing. It is clearly a topic that is getting some attention at the moment, and hopefully it’s something we will be hearing a lot more about in future as we move towards a circular economy.