Last summer I listed four reasons to cheer for Costa Rica in the World Cup. They didn’t win it, as it happens, but they are out in front in a competition of a different kind. I know seven countries that have announced plans to become entirely carbon neutral: Costa Rica, Iceland, Ethiopia, Norway, New Zealand, Monaco and The Maldives. 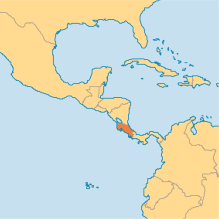 Most of them have set a timetable of some description. Ethiopia and New Zealand want to get there by 2025. As an oil exporter, I don’t take Norway entirely seriously, and the Maldives’ bid derailed with the ousting of president Nasheed. Costa Rica always intended to be the first to carbon neutrality, and it looks like they might be on track.

For the first 75 days of 2015, the country recently announced, it was 100% powered by renewable energy. That’s thanks to generous rains which have boosted their hydropower, but they still expect to hit around 95% over the course of the year.

That’s electricity generation. The bigger problem is the transportation sector, which accounts for 42% of Costa Rica’s emissions. Bringing those down will be a thornier challenge. One opportunity is the country’s rail network, which was almost completely shut down in the 90s after a financial crisis and hurricane damage. Work to return it to its former glory is ongoing, with new routes reopening and new stations planned.

Not everyone is on board with the goal. It only narrowly survived the change of government last year, though fears that it would be shelved entirely were unfounded. Others suspect it is more of a PR campaign than anything else, a way to get attention and attract foreign funding.

That’s entirely possible, but what makes Costa Rica likely to succeed in the race for carbon neutrality is their progress on reforestation. It is one of the few places in the world that has not just halted deforestation, but dramatically reversed it. At the end of the Second World War, three quarters of the country was forest. That had fallen to just 21% by the 198os, before ambitious payment schemes drove forest cover back to 52% by 2010. To be carbon neutral, Costa Rica’s CO2 emissions need to be below what their forest can absorb, and they are well placed to approach the target from both sides – cutting emissions, and also growing the forest.