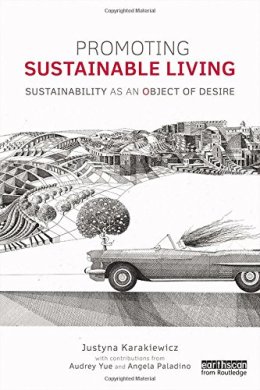 Suburbia is not a sustainable pattern of living. Too much transport is involved, too much land and energy. A more sustainable way of life will mean settlements with greater density, but that’s not what most of us want. We’re still pretty wedded to the semi-detached house with a garden. People can’t be talked into wanting something else, hectored into high-rises. So how do we make sustainability an object of desire?

That’s the challenge Justyna Karakiewicz considers in her book Promoting Sustainable Living, and she does so by leafing back through the history books to see how the idea of the suburbs was sold in the first place.

The suburbs have not always been with us. They were created, and they were promoted. People didn’t initially want them, and a considerable marketing effort was required to change our aspirations. That’s something of an untold story, and an interesting one.

We know what cities were like in the 19th century – overcrowded, dirty and unhealthy. Reformers such as George Cadbury and the Lever brothers began to experiment with planned communities for their workers, places that were bright and spacious, with gardens and leisure facilities within walking distance of work and home. Ebenezer Howard came up with the garden city, and low-density housing began to go mainstream: in this best of both worlds, you could live in your own home in the countryside but still get to work in the city.

The main investors in these new suburbs were the railway companies, who recognised that if people lived outside the city, they’d need to take the train every day. It was a massive business opportunity, and they threw their weight behind it. But early suburbs took a long time to fill. People weren’t sure that they wanted them.

There were two cultural obstacles at the time: country living, and the railway. Urbanisation had been relatively recent, and country living had associations of grinding poverty. And we may romanticise the steam trains of the past, but the railways weren’t seen positively either. The Victorian railway-building boom had been hugely disruptive. Communities had been divided and people turfed out of their homes – “37,000 people were displaced in London between 1859 and 1867”.

Karakiewicz has been through the archives of the London Transport Museum to see how the suburbs were advertised – emphasizing green space and leisure, wide empty streets free of the city’s crowds. Though what was on offer was mostly the British semi-detached model of housing, posters showed villas in their own spacious gardens. It was “a chance of a better life: one that approximated the life of the upper classes.” The suburbs became aspirational, and so they remain.

The second half of the book takes these lessons and begins to apply them to our current context. Just as you couldn’t sell the suburbs and the commute directly, so efforts to sell sustainability have gained little traction – people aren’t motivated by renewable energy or lower transport needs. Recycling more is not aspirational.

One of the book’s biggest contributions is some original research into what people do actually want, when it comes to choosing where to live. When asked, student-age Australians expressed a preference for walkable communities, with facilities nearby, and a stimulating, safe and pleasant environment. But since city living is expensive, and people don’t like apartments, the suburbs still serve as a kind of default aspiration. Karakiewicz goes on to demonstrate that when they were shown well-designed mixed density urban neighbourhoods, students often changed their minds and said they would like to live their after all.

“Throughout history our first eight thousand years of cities were designed as walking cities” Karakiewicz points out, “with everything available within walking distance. But during the last one hundred years everything changed when cities were designed not for pedestrians but for cars.” We know how to build walkable cities again, developments that are more sustainable and that are great places to live. The bigger challenge is to change the culture, showing people that higher density urban living doesn’t need to mean overcrowding. The book profiles a number of examples, including Singapore and some of the most recent eco-cities being built in China and the Emirates.

Along the way, there are insights into how consumerism developed, including a fascinating profile of Josiah Wedgewood and how he made pottery aspirational. Contributing authors Angela Paladino and Audrey Yue discuss the psychology of sustainability and consumerism.

Karakiewicz is a professor of urban design at the University of Melbourne, Australia, and the book is focused on Australian attitudes to housing. It’s not exclusively Australian by any means, and most of the historical aspects are British, but it would be interesting to compare results if the surveys were repeated in Britain. I’d also caution that it’s aimed more at an academic readership than a general one. It is a bit technical at times and sometimes goes off on a tangent. But if you’re working on new urbanism, or interested in communicating sustainability, there’s plenty here to think about.