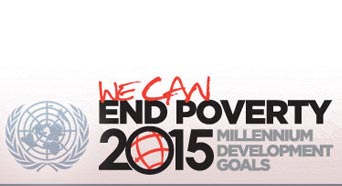 It’s 2015, which means time is up on the Millennium Development Goals, the UN’s mother of all to-do lists that was agreed in 2000. Progress has been tracked along the way, and the final report is now in. How did we do?

Goal 1 – eradicate extreme poverty and hunger. Extreme poverty has halved since 1990, with a noticeable acceleration since 2000. Much of that is China, which has cut poverty rates by 94%, but almost every region has taken big strides forward. Sub-Saharan Africa remains a challenge, and with over 800 million people still in extreme poverty we’re a long way from eradicating it. There’s been progress on hunger, with the number of malnourished people in developing countries almost halved. As the goal was about hunger rather than food security, there are still massive vulnerabilities here, and there’s more to do on supporting agriculture and smallholder farmers.

Goal 2 – universal primary education. Up from 83% to 91% in developing countries, putting it well within reach in the near future, if not quite within the scope of these targets. One in five children in Sub-Saharan Africa is still out of school, but Africa has also seen the fastest progress. Another challenge to universal enrolment is conflict. Half of the world’s 60 million displaced people are children. Conflict has pushed up the number of children out of school in a number of countries since 2010, reversing some of the progress.

Goal 3 – promote gender equality and empower women. The numbers of women in government has risen in many parts of the world. Enrolment of girls in primary school has increased dramatically in Southern Asia, and two thirds of developing countries now have gender parity at primary level. Access to contraception has improved. That’s all good, but women are still more likely to be in poverty than men. Wage differentials remain significant. Even in the most developed countries, there’s still a mountain to climb on this one.

Goal 4 – reduce child mortality – the number of children dying before the age of five has halved since 1990. Part of this is down to vaccination programmes against diseases such as measles, which declined by 67% around the world. However, a quarter of the world’s under-5s have stunted growth – ie they would be taller than they are if they had a decent diet. Child nutrition is an obvious next step. The children most at risk now are harder to reach, often in rural areas and in the poorest countries. That presents a challenge in completing the task.

Goal 5 – improve maternal health – mortality has reduced by 45% since 1990, the number of births attended by a health professional has risen from 59 to 71%, and ante-natal care has risen significantly to 89%. A definite improvement, but that’s still over one in four babies delivered without skilled care. Again, it is rural areas that are proving harder to reach.

Goal 6 – combat HIV, malaria and other diseases – new HIV infections have fallen by 40% in the last decade, but that’s still over 2 million people a year. The number of children orphaned by AIDS, a heart-breaking statistic if ever there was one, has peaked and is now in decline. 10 million more people are receiving anti-retroviral treatment than in 2003. Deaths from malaria have fallen 58%, and TB by 45%. Malaria is still endemic in 97 countries and consumes a disproportionate amount of health spending – Godspeed that vaccine.

Goal 7 – ensure environmental sustainability – always the vaguest of goals, this is the one with the least success. The summary of achievements in the final report starts by celebrating the 98% reduction in ozone depleting substances. Since the Montreal Protocol came into force 11 years before anyone signed the MDGs, I’m having none of that. We missed this goal on climate, on biodiversity, and on forest and fish stock stewardship. Access to clean drinking water has improved substantially, but not enough to meet the goal. As we’ve discussed before, if we don’t make progress on sustainability, climate change could reverse all our other development achievements.

Goal 8 – develop a global partnership for development – progress has been made on opening up trade and lifting debts burdens. Overseas development aid increased, but then hit a plateau. Because they included a sub-goal on supporting new technologies, the UN helps itself to a slice of credit for the fact that 95% of the world’s population has mobile phone signal.

Where does that leave us, and what should our new priorities be? Plenty more on that here.