A few weeks ago I wondered if it was possible to build a beautiful power station, something Britain’s energy minister has suggested. I think you can, but another possibility comes to mind: can you hide a power station?

Well, we’ve already done it a couple of times. Cruachan, the ‘hollow mountain’, is one of them. It’s a Scottish mountain that has a hydropower station in a huge cave deep inside it, accessible only through a 1km tunnel. It’s a world-first and is now a tourist attraction, which kind of defeats the object of hiding it away in the first place.

Electric Mountain in Wales, is similar. Its hydropower station is buried inside Europe’s largest man-made cavern. Both of these are highly site-specific, but practically invisible on the landscape. But can you hide a more conventional power station?

Here’s one attempt to hide a gas power station in Germany. The architect proposed wrapping the whole building in a green mesh of growing plants and tucking it away among the trees.

Power stations are often on the edge of towns and just too bulky to hide effectively, but there are certainly plenty of examples of hiding other kinds infrastructure that need to be closer to where people live. Toronto has dozens of substations built to look like ordinary houses. London and New York have dummy houses that conceal subway ventilation shafts. There’s a facade of houses in Paddington that disguises a railway cutting where steam trains used to stop and let off steam. The neighbours would have noticed the blacked-out windows, but most wouldn’t.

Google Earth has given away a few secrets when it comes to hidden buildings, such as this one in Nashville:

Aesthetics is one reason to tuck things away, and security is another. During the Second World War, painters were hastily commissioned to draw up designs for hiding Britain’s power stations and factories. Some of them were painted in dazzle camouflage, others decorated with images of fields and houses so they’d blend in from the air. Across the Atlantic, Boeing hid their plane factory under an enormous burlap blanket, and placed plywood houses and chicken-wire hedges and trees on top to complete the effect. 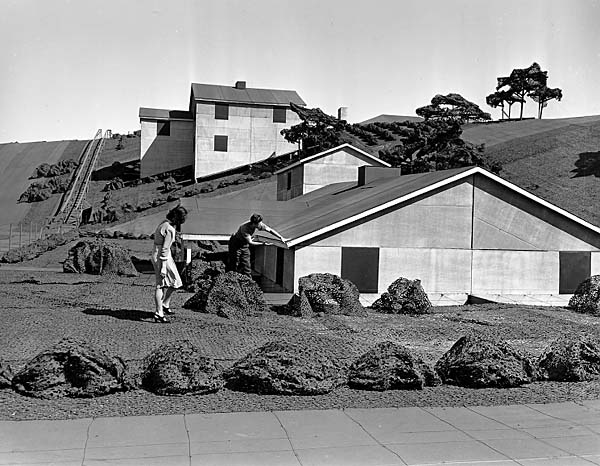 So there are a few different ways we could hide our power infrastructure. Of course, it would help if power stations weren’t so big, and that’s one of the many advantages of renewable energy. It can be decentralised and spread around. For the time being we still need bigger power stations to provide base load and back-up, but the more solar power installations we have, the fewer people need to live next to a coal or gas power plant. As battery and storage technologies develop, we’ll be able to close and decommission even more of them. Even renewable energy at its most intrusive – onshore wind or biogas plants – are easier to live with than fossil fuels.

Give it another generation, and perhaps the question of whether or not we can beautify or disguise our power infrastructure will seem rather obsolete.

I’m now off on holiday for a week, and taking a break from the blog for a few days…