On this day seven years ago, Lehman Brothers filed for bankruptcy, precipitating a global financial crisis. So it’s a fitting day to hold an annual antidote to the rampant greed that caused the crash. On Free Money Day, people go out in the streets and give away their own money to strangers. 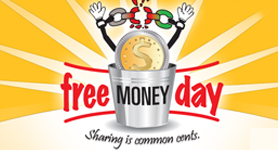 It’s no doubt a crazy thing to do in some people’s eyes, but it’s a powerful symbol of generosity and freedom. It’s a way of defusing our obsession with money. For those that take part, it also proves the point that it’s more blessed to give than to receive. Giving away your money, no strings attached, can be a liberating experience.

You don’t have to sell all your possessions and give to the poor. There’s no minimum sum to scrape together to participate – give what you like. You don’t need to make it a big stunt either, though you might get to talk about what you’re doing a bit more if you draw a bit of attention. Some people put money through letterboxes or leave it for people to find. Just give away as much as you like, two coins at a time – one to keep and one for the recipient to give away in turn.

Is it a bit of a token gesture? Yes, quite literally. It’s a symbolic act, a ‘signal interruption’ that breaks the conventional view that we can never have enough money. As the website puts it:

We want to question how it is that so many of us end up working too many hours, in too much debt, and how this adversely affects our lives. Our intent is to release the hold money has over us. By giving money away, we ‘interrupt the signal’ of the money program we subconsciously run: Always believing that we never have enough, and that we are afraid of running out of it. In the process, might we open up exciting futures beyond the pursuit of more?

Find out more at Freemoneyday.org, follow them on twitter, or check out the organisers from the Postgrowth Institute.