This man is Henri de Laulanié. I’d never heard of him until this week, and the chances are you haven’t either. He avoided the spotlight and there are few photos of him. His life’s work was barely recognised in his own lifetime, but his innovations may turn out to be key in feeding the growing world population.

De Laulanié was born in France in 1920 and trained at an agricultural college before becoming a Jesuit priest. He was sent as a missionary to Madagascar in 1961, where he spent the rest of his life studying rice. His first years in the country were spent observing, travelling the whole country in his Citroen 2CV, looking for local differences in technique and yields. He began experimenting with traditional rice cultivation methods and in the early 80s he founded an agricultural school in Antsirabe. More organic methods were forced on the school as government fertiliser subsidies were cancelled.

By 1983 de Laulanié had discovered a ‘system of rice intensification’, “almost by accident”. Farmers using his techniques could get 8 tonnes of rice per hectare, against the 2 they usually got with conventional farming. And yet, his system used half the water, a tenth of the seeds, and could work with far lower levels of fertiliser or even just compost. Farmers could grow four times more rice with fewer inputs – a highly profitable method of farming.

SRI, as the technique is now known, has a couple of relatively simple ideas that just worked, and at first nobody was quite sure why. De Laulanié planted tiny seedlings rather than larger plants, and gave them more space than usual. And rather than flood the paddy in the traditional way, he just kept the ground moist. This encouraged the rice plants to grow bigger root structures, with more tillering from the original seed. His technique was more labour intensive, but the yields were exceptional.

This being Madagascar, nobody really noticed much of this, especially since it took several more years for De Laulanié to explain to his own satisfaction why SRI worked. Along with his Malagasy colleagues he set up a foundation called Tefy Saina to spread the word among local farmers, and by the early 90s his system had come to the attention of researchers at Cornell University. They started to study it more carefully, demonstrating that De Laulanié had stumbled on a remarkable symbiosis – under the right conditions, a beneficial relationship could be created between rice plants and soil micro-organisms. SRI is still regularly dismissed as a primitive pre-industrial method of agriculture, but Cornell’s Norman Uphoff argues that its fusion of traditional tools and applied science is far more advanced than it looks. “Post-modern agriculture” he calls it in Joel Bourne’s book The End of Plenty. 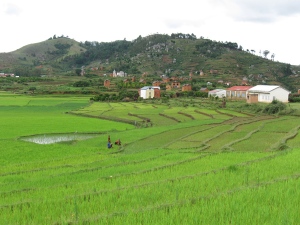 As the Cornell team enthused about SRI, others began to wonder if it would work for them. A researcher in India saw the water savings and figured it was worth a shot in the Punjab, which was experiencing water shortages. He persuaded a few farmers to trial the ‘Madagascar method’, and began to get good results. Others took it to China.

In 2012 a farmer named Shri Sumant Kumar heard about SRI from a local non-profit and decided to try it with some friends. He combined the SRI techniques with a little fertiliser, and harvested a world record 22.4 tons per hectare from his test plot. This was an extraordinary harvest, but De Laulanié would not have been surprised. With a skilled farmer and perfect conditions, he guessed that his system could be able to deliver as much as 30 tons, adding that “I hope that a Malagasy rice planter will be the first to reach this record.”

That 30 ton benchmark is still there for the taking, but the Malagasy planters will have competition. SRI is now used in China, India, Cambodia, Vietnam, and several other places. Farmers in India have tried applying SRI principles to other crops, including wheat and potatoes. Between 4 and 5 million farmers now use SRI around the world, and for the many countries where rice is a staple, it is one of the most promising ideas for increasing yields ahead of population.

As for Father Henri, he died of an embolism in 1995, at the wheel of his battered Citroen 2CV, in the car park of the College St Michel in Antananarivo. He was 75, and at that point his pioneering work had warranted just one article in a Belgian agricultural journal. Though he never got to see it, millions of people now benefit from the wisdom that he gave his Malagasy farming students: “observe and listen to your rice. It is the only one who can really tell you what should be done.”