China has two inter-related problems when it comes to water. On the one hand, the country has major problems with urban flooding. 200 cities flooded in 2013. In some cases this is because developments were on flood plains. Sometimes whole rivers have been moved, but there are reasons why rivers form where they do and rainfall alone can overwhelm a city. Mainly though, the spate of flooding in China is the result of urban areas growing faster than drainage systems can keep up. This is a problem now, but climate change will exacerbate it further.

On the other hand, China also experiences water shortages – or rather, its water is in the wrong places. Never shy of a big hydrology project, the country has engineered an eye-wateringly expensive canal that will move water north towards Beijing. That’s not going to work for every city, nor would it be affordable. So the country needs solutions to both too much water and not enough, often in the same cities, at different times of the year.

That solution is the ‘sponge city’, and 16 places have been designated as pilot cities to test out the idea. “A sponge city is one that can hold, clean, and drain water in a natural way using an ecological approach,” explains Kongjian Yu of Peking University’s College of Architecture. 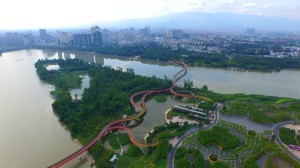 Fundamentally, it means that cities need to be more permeable. Water needs to have somewhere to go, and where that will be depends on the location. It could be a ‘stormwater park’ or rain garden, a green space designed to flood and contain excess rain water and planted with appropriately flood resistant species. It could mean porous pavements, so that water soaks away rather than runs off into drains. Water plazas, like the ones Rotterdam has been building, are another technique. 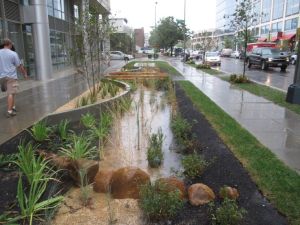 The same techniques can be used to save water. Rather than funneling water out of the city through drains, gutters and sewers, allowing water through the city and into the ground means wells and aquifers are topped up. Rainwater catchment systems on roofs can capture rainfall and channel into through filtration systems and store it for drier periods. The grass verges alongside roads can be used for bio-retention, which is an ecological design that filters urban run-off. Water runs through sand, then into ponds or reedbeds, filtering pollutants out of the water before it soaks into the ground.

If the initial three year pilot is successful, China may ‘spongify’ more cities. And in our climate disrupted future, these sorts of considerations could become a standard part of urban planning.