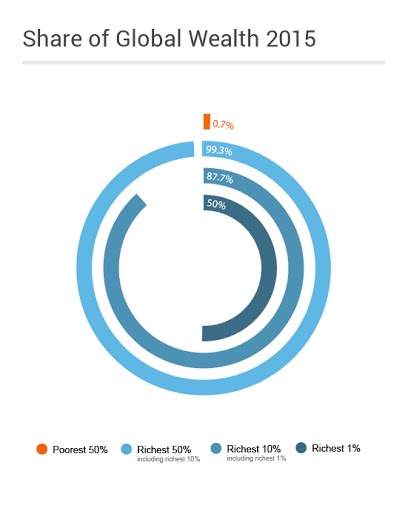 With the World Economic Forum starting this week, Oxfam are back with their now annual update on global inequality.

Last year the charity warned that the world’s richest 1% owned 48% of the world’s wealth, and that they would likely own a whole half by this year. And so it has proved. Despite the attention, including at the Forum itself, the problem is getting worse rather than better.

For many people, inequality is irrelevant as long as growth is lifting people out of poverty. Oxfam has little time for that. Yes, many people have been lifted out of extreme poverty in the last 20 years, they say. But many more would have benefited if growth had been shared:

Oxfam is unequivocal in welcoming the fantastic progress that has helped to halve the number of people living below the extreme poverty line between 1990 and 2010. Yet had inequality within countries not grown during that period, an extra 200 million people would have escaped poverty. That could have risen to 700 million had poor people benefited more than the rich from economic growth.

Creating wealth and ending poverty are not synonymous, and since they continue to be talked about as if they are, Oxfam’s work remains important.